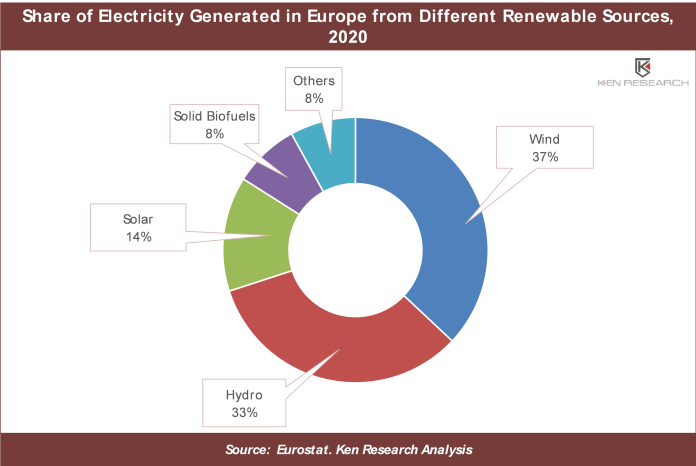 Green Hydrogen is increasingly gaining popularity across Europe as a way to reduce greenhouse gas emissions and due to its abundant supply, posing competition for fossil fuels such as oil and coal. Rising government initiatives to endorse the use of fuel cell electric vehicles (FCVs) are increasing demand for advanced electrolysis technologies, which is helping drive the Green Hydrogen market growth. Furthermore, accelerating hydrogen transit infrastructure and storage deployment with several Important Projects of Common European Interest (IPCEIs) are contributing is also expected to boost the market.

1.   Europe has Seen Accelerated Growth in Green Hydrogen after Renewed Initiatives of Governments towards Decarbonization in 2021.

The Europe Green Hydrogen Market is expected to witness strong growth during the forecast period, due to the rising demand for renewable energy sources, notably in electricity generation. In addition, the ongoing COVID-19 pandemic led to a significant reduction in power generation using fossil fuels, while renewable energy exploded in popularity. For instance, while transportation fuels were in lower demand due to reduced mobility during the pandemic, the need for power generation remained same or increased. Governments have also renewed their initiatives towards Decarbonization after initial wave of the pandemic. This created an opportunity for renewable energy sources (Solar and Wind) to expand their use in electricity production.

The growing climate change concerns and support for environmental, social, and governance (ESG) considerations are driving the demand for renewable energy resources. Several industries and organizations are now adopting techniques to reduce greenhouse gas emissions by substituting renewable fuels for fossil fuels, increasing energy efficiency, and discouraging carbon emissions. For instance, according to the International Energy Agency (IEA), a Paris-based intergovernmental organization, renewable energy utilization increased by 3% in 2020, while demand for other fuels diminished during the same period. In addition, the major key factor was a growth of nearly 7% in electricity generation from renewable sources.

Numerous European companies, including Brambles, The Holcim Group, and PGE Polska Grupa Energetyczna S.A., have committed to decarbonizing their economies or have announced plans to reduce their carbon emissions to zero in the coming years. This necessitates massive adaptation of renewable energy to replace fossil fuel-based power plants. For instance, according to Eurostat, a statistical office of the European Union located in Luxembourg, renewable energy sources accounted for 37% of total EU electricity consumption in 2020, up from 34% in 2019. In addition, wind and hydropower accounted for more than two-thirds of total renewable electricity generation (37% and 33%, respectively), while solar power increased from 1% in 2008 to 8% in 2020.

3.   The Higher Cost Associated with Hydrogen Fuel Cells is the Most Significant Barrier to Widespread Green Hydrogen Adoption.

Unlike batteries, which are mostly built of raw materials, the most expensive part of a fuel cell is making the fuel cell stack itself, not the materials used to construct it. The cost of constructing and maintaining hydrogen stations must also be lowered for the market to support a hydrogen economy. Presently, the cost of a unit of electricity generated from hydrogen fuel cells is higher compared to other energy sources, including solar panels. It might change as technology advances, but for the time being, the cost of producing hydrogen is a constraint to widespread use, even though it is more efficient once produced. In addition, this cost may have an impact on future costs, including the price of hydrogen-powered vehicles.

According to the International Council on Clean Transportation (ICCT), an independent nonprofit organization incorporated under Section 501 of the US tax code, a mid-level scenario of the EU average at-the-pump price of onsite renewable hydrogen in 2020 is 11 euros per kg, which is predicted to fall to 5 euros by 2050. In addition, the cost of hydrogen generation is the major contributor to the Levelized price of hydrogen at the pump owing to the increased capital investment in both renewable electricity generation and water electrolysis. With the advancement of both technologies, the price of hydrogen at the pump is expected to fall 30% in 2030 and 50% in 2050 compared to the cost in 2020.

4.   Alkaline Electrolyzer dominates the market, accounting for more than half of the revenue share, and will maintain dominance during the forecast period.

Among the technology segments, Alkaline Electrolyzer remained the dominant segment during the 2019-2021 period contributing over half of the market revenue share. Further the Research Study found that this segment is likely to retain dominance even by 2030. Their dominance is owing to the long-term stability and longevity of alkaline electrolysis cells, which can also be stacked in large quantities. In addition, the primary advantage of alkaline technology is that it uses a liquid electro catalyst instead of expensive metal materials.

However, the Solid Oxide Electrolyzer segment is expected to witness the fastest growth during the forecast period at about 45%. The growth is mainly attributed to the increased demand for high temperatures in power-to-x applications as SOEC is carried out at extremely high temperatures, typically 700-1000°C, and repurposing thermal heat energy or waste heat that can significantly improve efficiency by reducing the need for electrical energy.

5.   Few Diverse Global Players Dominate the Market Holding more than half of the Market Revenue Share despite Presence of the over 150 Competitors.

The Europe Green Hydrogen Market is highly fragmented in nature with over 150 participants comprising global players (having presence in 2 or more continents), regional players (having presence in multiple countries within Europe), and Country-Niche Players (presence limited to just 1 country or very niche presence in the value chain). Most of Country-Niche’s players are renewable energy & equipment suppliers. Some of these who successfully create application-specific solutions often get acquired by large global players seeking to grow & diversify quickly.

However, the Research study found that few major players, such as Linde Plc., Shell Plc., Air Liquide, and Thyssenkrupp investing heavily in R&D to create the best possible solutions and technology to gain a higher market share. In addition, several other players are implementing several strategies to strengthen their position in the hydrogen industry, including M&A, geographical expansion, and collaborations.

Companies Mentioned in the Report: –

Key Target Audience – Organizations and Entities Who Can Benefit by Subscribing This Report: –

For More Information on The Research Report, Refer to Below Link: –

Buy Now Country-niche players and regional players constitute ~55% and ~40% of competitors respectively despite the presence of about ~400 competitors, find a recent market...
Read more
Clean Technology