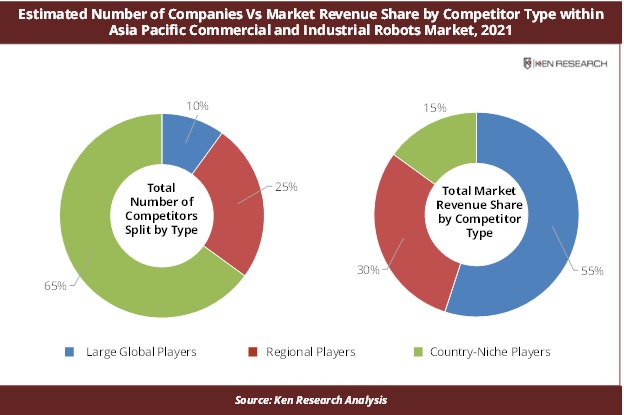 Few Diverse Global Players Dominate the Market Holding ~55% of Revenue Share Despite Presence of about ~250 Competitors Comprising a Large Number of Country-Niche Players and Some Specialist Players, finds a recent market study on Asia Pacific Commercial and Industrial Robots Market by Ken Research

Competitive Analysis by the Research Study found that the Asia Pacific Commercial and Industrial Robots market is highly competitive with ~250 players which include globally diversified players, regional players as well as a large number of country-niche players having their niche in Commercial and Industrial Robots development and execution for specific segments. The large global players even though comprise just about 5% in terms of the number of companies, hold ~55% of the market revenue share followed by regional players which account for ~25% of the market revenue. Most of the country-niche players are suppliers of components and cleaning robots. Some of these players who successfully evolve to create application-specific solutions often get acquired by large global players seeking to grow and diversify quickly.

Detailed comparative analysis of key competitors available within the Research Study shows that specialist players such as Yaskawa, Fanuc, Kawasaki, Mitsubishi, iRobot, Robostar, and Seiko Epson are highly focused on providing robots for various applications and advanced techniques that can be used across multiple end-user industries, including automotive, electrical and electronics, plastic and chemicals and more. Furthermore, several companies and organizations are aggressively investing in R&D and advancements in AI, IoT, and Machine learning for Commercial and Industrial Robots are creating new opportunities in the market.

(1) Wider adoption of production robots, concentrating on the top three manufacturers- To provide 700,000 manufacturing robots (collectively) by 2023. Standard models of robot usage must first be designed for the three largest business types, such as agriculture, textiles, food and beverage, etc.

The Ongoing COVID-19 Led to New Applications of Robots

Following Covid-19, all manufacturing and construction activities ceased. Due to disrupted or constrained transportation activities, supply networks and procurement chains suffered significant difficulties. Many sectors decided to scale back their investments in automation operations as a result of a fall in both supply and demand. However, the healthcare and pharmaceutical companies began using them more frequently to deliver meals, sterile supplies, and medications to Covid facilities. For instance, Asimov Robotics, an Indian robotic startup business, created a commercial robot to alert people about the coronavirus and to hand them masks and hand sanitizers.

Increased Government Initiatives in The Commercial and Industrial Robots Industry, Adoption Of Industrial Robotics Solutions By New End-User Industries Like Healthcare And Education Led To Significant Developments In The Market

-Create three to five robot manufacturers that are competitive globally.

-8–10 industrial clusters should be built.

-45% of the home market should be taken up by high-end robots made in China.

Companies Mentioned in the Report: –

The Facilities Management market in the United Arab Emirates is in the growth phase with technology integration driving it forward: Ken Research