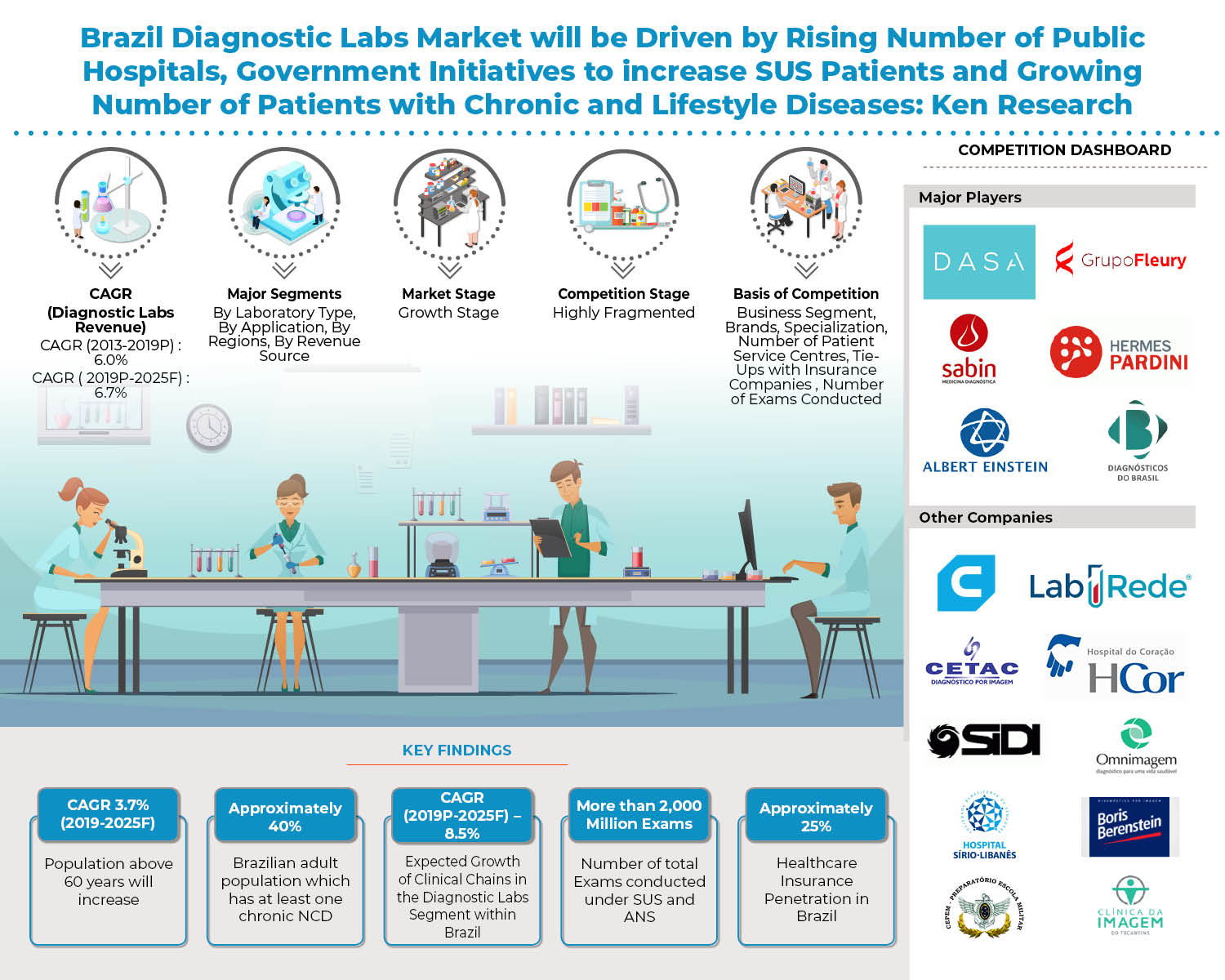 Diagnostic Labs industry in Brazil had begun to evolve in the early 1900s. In the late 1960s laboratory automation process arrived in the country and was capable of processing diagnostic tests more efficiently and in greater volume in the country.

In 2000, the Private Supplementary Healthcare System (ANS) came into existence for the Brazilian population which was followed by the consolidation of independent laboratories to clinical groups.

The Revenue from diagnostic labs market in terms of value was accounted at USD ~ Billion in 2013. The market grew with a CAGR of ~% in the time period of 2013-2019P and was evaluated at USD ~ Billion in 2019P. Market Size of Diagnostic Labs in Brazil in terms of the number of examinations conducted was recorded at ~ million with a CAGR of ~% during the period 2013-2019P. Growth in the Diagnostic Labs industry was also seen in terms of a number of laboratories with ~ laboratories at the end of 2019P. The economy is growing with ~million ANS healthcare insurers and ~million SUS healthcare insurers in 2018.

By Type of Labs

The diagnostic labs market in Brazil is highly fragmented with around ~ independent players and ~ clinical chains. Independent labs dominate the market in terms of revenue in Brazil largely due to their presence in almost every city and their locations nearer to hospitals and clinics.

X-Rays accounted for the highest percentage share of ~% in terms of a number of exams in the country. It is followed by Ultrasound wherein the exams are largely conducted for Gynecology and Obstetrics. MRI and CT scans accounted for the lowest share of ~% and ~% in terms of a number of examinations conducted during the year 2019P.

By Type of Clinical Analysis Tests

Routine tests in Brazil accounted for the highest share of ~% and ~% in terms of revenue and in terms of a number of exams during the year 2019P largely due to high preference and most recommended routine exams. The majority of the routine tests are conducted by independent laboratories in the country.

Southeast Region in Brazil accounted for the highest revenue share of ~% in 2019P largely due to the number of laboratories and hospitals in that region. In 2018, the South region is the second the highest region with~% share in terms of revenue followed by South, Midwest, and North.

Healthcare Operators and Insurers accounted for the highest percentage of ~% in terms of revenue wherein, a major proportion of patients are referred by doctors. Out-of-Pocket is the second major revenue source with a ~% share in terms of revenue from this segment.

How Is The Competitive Landscape Of Diagnostic Labs Market In Brazil?

The laboratories in Brazil are operating in different business segments with different brands and collection points. These laboratories majorly compete on the basis of Number of Exams, Examination Portfolio, Major Specialization, Patient Service Centers and Tie-Ups with Hospitals and Healthcare Insurance companies. The major diagnostic groups that are operating in Brazil are Dasa Group, Fleury Group, Hermes Pardini, Allier Medicos a Frente, Diagnostics do Brasil, Albert Einstein Medicina Diagnostica, Sabin Diagnostics, and others.

What Is The Future Outlook And Projections For Brazil Diagnostic Labs Market?

Brazil Diagnostic Labs Market revenue is anticipated to reach from USD ~ billion in 2019P to USD ~ billion by the end of 2025 with a CAGR of ~% during the period 2019P-2025F. The market is growing owing to multiple factors that include an increasing number of Public Hospitals, Government activities to increase SUS patients, growing health insurance penetration, rising disposable income, growing aging population, per capita health expenditure, rising demand for tele medicines and artificial intelligence in laboratory equipment and process.

Growing Government Healthcare Expenditure and an increasing number of chronic and lifestyle diseases including HIV, diabetes, and others coupled with Growing and improving access to healthcare services and the number of laboratories will drive the demand for Diagnostic Labs in the coming future.

By Type of Labs

Buy Now 5G, the fifth generation of cellular wireless technology, has the potential to deliver the massive connection power and fast speeds that can assist...
Read more
Business

The UAE Health Tech Market is driven by changing consumer behavior on account of the pandemic which resulted in an increasing prevalence of customers...