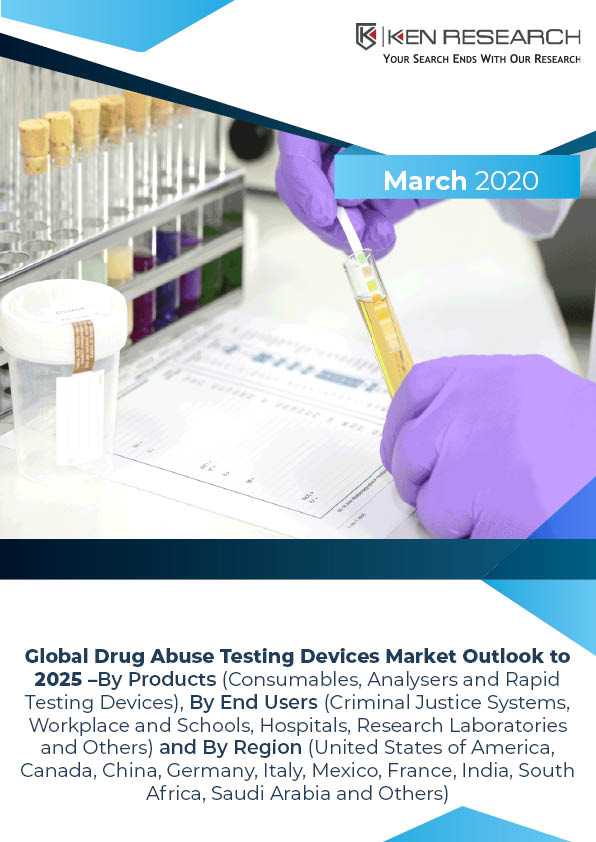 The report titled “Global Drug Abuse Testing Devices Market Outlook to 2025 –By Products (Consumables, Analysers and Rapid Testing Devices), By End Users (Criminal Justice Systems, Workplace and Schools, Hospitals, Research Laboratories and Others) and By Region (United States of America, Canada, China, Germany, Italy, Mexico, France, India, South Africa, Saudi Arabia and Others)” gives an in depth, comprehensive outlook on the drug testing devices market globally. The report covers various aspects including genesis of the market, global drug abuse trends, market size by revenue along with segmentations for four regions (North America, Asia-Pacific, Europe and LAMEA). Country snapshots for major 10 countries (USA, Canada, China, Germany, Italy, Mexico, France, India, South Africa and Saudi Arabia and Others) including segmentation by product, by end users, by rapid testing devices (urine testing devices and oral fluid testing devices) and by production of devices (domestically or imported) are also present. A detailed section on the new technologies used in these testing devices, the challenges faced in the market, company profiles of major players, their strengths and weakness and other competition factors have been covered. The report concludes with the future predictions of the above mentioned sections along with analyst recommendations for each stakeholder in the market. 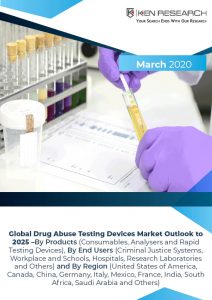 As deaths due to drug overdose have been increasing, a number of countries are introducing strict laws with respect to drug consumption; this has given a push to the market of drug abuse testing devices. Initially, traditional samples such as urine and oral fluid were used the most, however, with time there has been a shift towards more convenient samples such as hair and fingerprint devices which use sweat as its sample to detect the drugs that an individual has consumed.  As more workplaces and schools are introducing random drug testing practices, the demand for drug abuse testing devices has been constantly increasing.

The North American region contributed the highest revenue percentage share in the global market as the USA is a leading exporter of these products to rest of the world. Marijuana is the most commonly used drug in this region. The mean average death due to drugs in Europe was calculated to 39 years in 2018. The use of opioid in treating moderate to severe pain is one of the emerging concerns in Asia Pacific. It has lead to excessive and illegal use of the drug. The MEA region has the lowest contribution in the market as the laws present in this region are extremely strict and drug possession or consumption can lead to severe punishment and penalties.

The consumables include all the products such as cotton, syringes, reagents etc. which are a part of drug abuse testing. This product segment hold the highest share in the overall drug abuse testing market in 2019 as most of them  have an extremely short shelf life and cannot be used more than once. The analysers include breath analysers, chromatography analysers and immunoassays. These devices provide extremely accurate results and contributes second largest segment. The rapid testing devices which include urine testing devices and oral fluid testing have the lowest share towards the overall drug abuse testing devices market, as with time, there has been a gradual shift towards new technologies which use different samples.

The criminal justice systems use these devices on an extremely large scale to keep check on the consumption of different type of illicit drugs in the country. For drugs testing, urine tests were most common used as they provided accurate results, however owing to inconvenience and time taken for the results to come has caused a shift from traditional methods to more technology advanced options. Also a number of countries have made drug abuse testing compulsory before employment. For example, since 2008, the Italian law has prescribed mandatory drug tests for certain jobs which entail safety risks to others, setting out which drugs can be tested for and what procedures are to be followed. The preference for research laboratories for these devices is comparatively less as they use bigger and complex devices for their research. The other end users include customs departments, sports authorities and similar regulatory bodies. As the number of cases of doping has been increasing year on year, the sports authorities also take these tests seriously and demand for these products.

The Global Drug Abuse Testing Devices market has a number of players as the devices have a number of substitutes which are produced by a number of companies. However, the market share is dominated by a few players which include Abbott Laboratories, Danaher Corporation, Quest Diagnostics and Siemens Healthineers. Other companies in this field include Thermo Fisher Scientific, Dragerwerk AG, Bio-Rad Laboratories, OraSure Technologies Inc, Hoffmann-La-Roche AG and many others.

By 2025, it has been estimated that the market will be driven by innovative technologies with core focus on increasing test accuracy, finding new samples and reducing result turnaround time. Mergers and acquisitions would help large companies to expand into new market segments and industry would experience further consolidation in future. Along with this, the growing awareness among consumers and initiatives taken by the governments of various countries to curb drug consumption is expected to contribute to further growth in the industry.

KSA Fitness Equipment Market is expected to grow at a CAGR of ~18% by 2026: Ken Research