Global Fingerprint Sensor Market is expected to growth of ~10% over the next six years (2022-2028): Ken Research 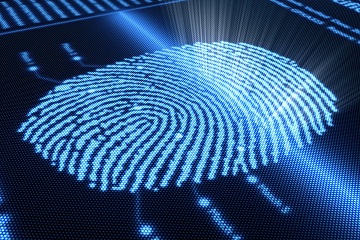 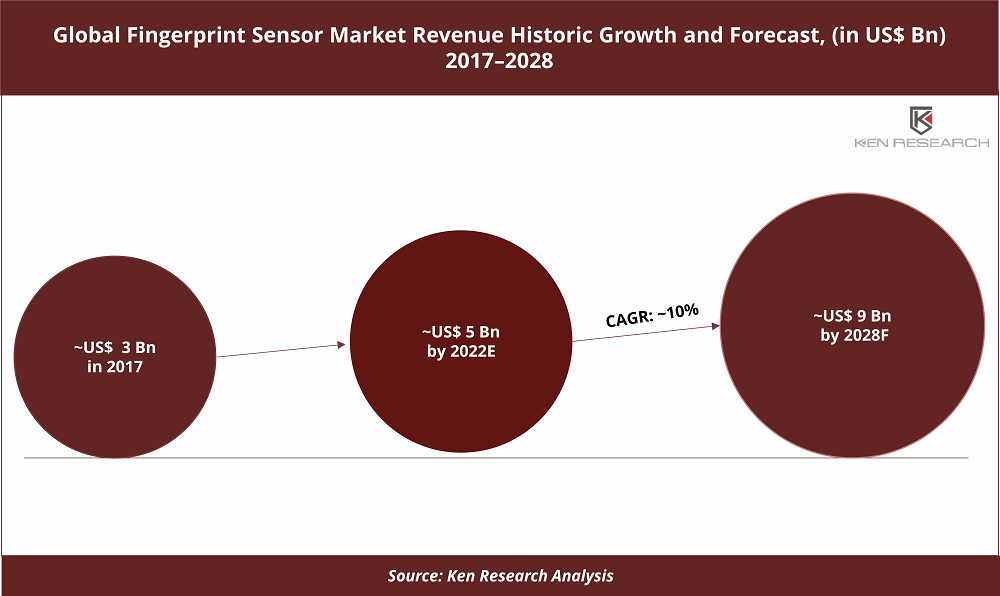 An increase in the number of intelligent devices, such as tablets, laptops, smartphones, and smart wearables per person, is expected to increase the growth of the studied market. Additionally, the rising demand for biometric devices has accelerated its growth.

Global Fingerprint Sensor Market faces several restraints such as the availability of new technologies like facial recognition and iris recognition. Additionally, the high cost involved in the development of fingerprint sensors is a major barrier to the growth of the market.

The impact of COVID-19 pandemic negatively impacted the sales and growth of the Fingerprint Sensor Market. The pandemic led several manufacturers to halt their business operations due to disruptions in the global supply chain. Several manufacturers faced chip shortages and the shelf life of produced fingerprint sensors was increasing. This segment, which comprises wearables, laptops, desktops, and other appliances, was impacted, as production declined due to disruptions in the global supply chain, including China, which is the major hub of OEMs in this segment.

By Type: The capacitive segment held the largest market share in the year 2021 for the Global Fingerprint Sensor Market. 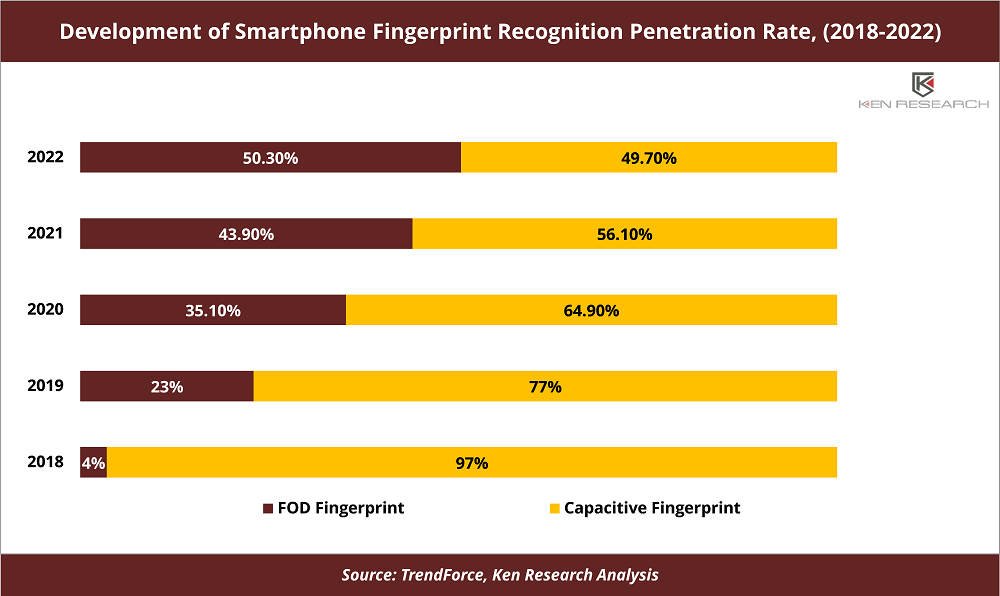 By Application: The smartphone/tablet segment held the largest market share in 2021 for the Global Fingerprint Sensor Market.

By End-User Industries: The consumer electronics segment held the largest market share in 2021 for the Global Fingerprint Sensor Market. 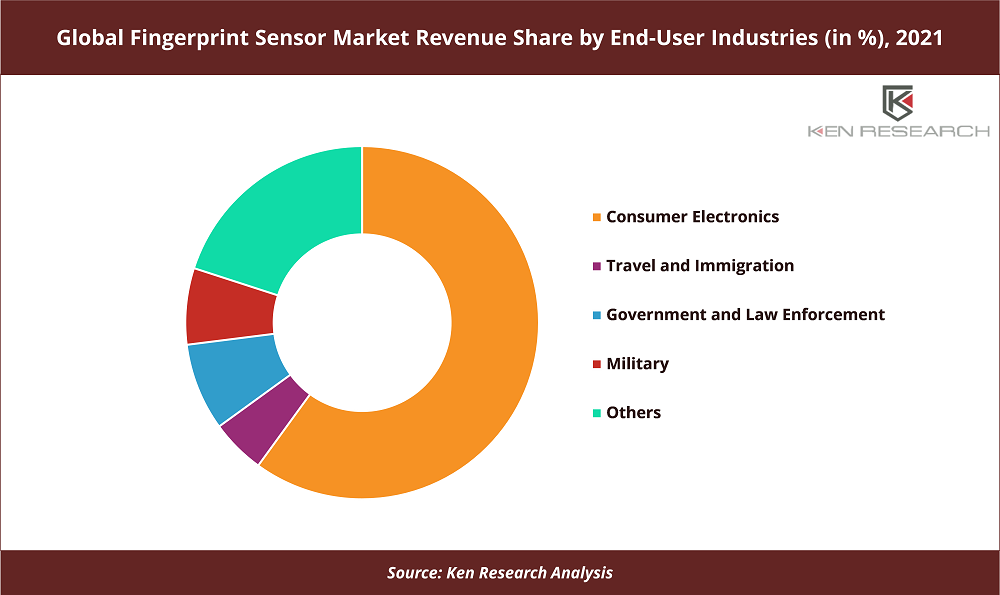 By Region: The North America Fingerprint Sensor market held the largest share in 2021. On the other hand, Asia Pacific region is expected to grow at the fastest CAGR during the forecast period (2022-2028) 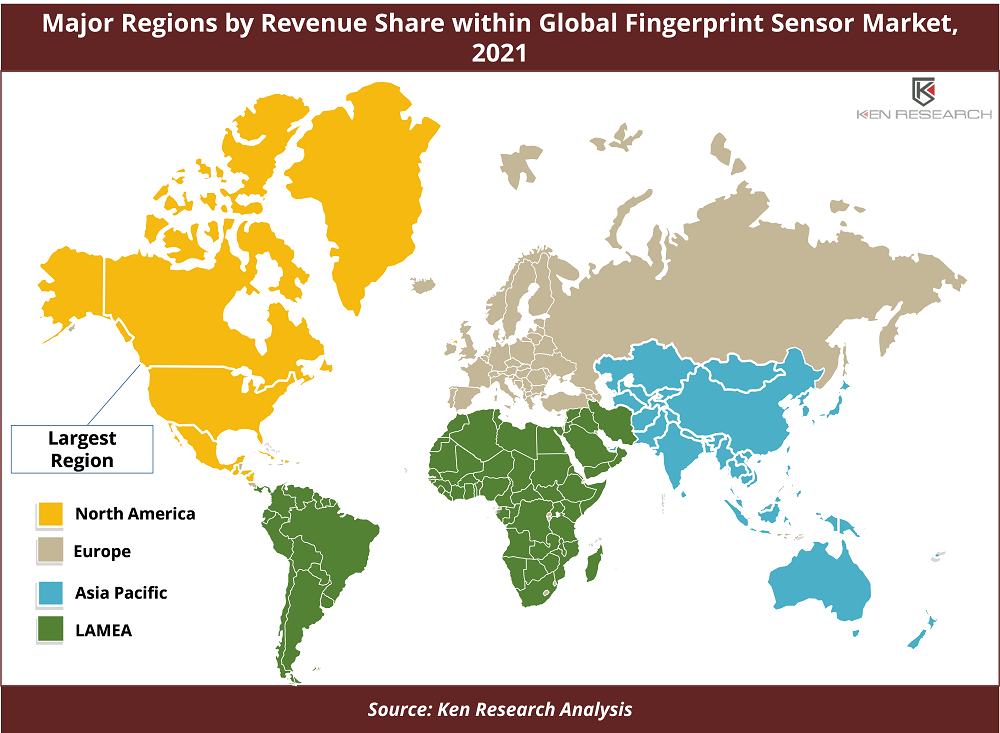 The Global Fingerprint Sensor Market is highly competitive with more than 300 players which include globally diversified players, regional players as well as a large number of country-niche players in the Fingerprint Sensor market.

The large global players constitute ~10% in terms of the number of competitors followed by regional players which account for ~30% of the constitution. Most of the country-niche players deal with the local demand of the region. Some of these who successfully evolve to create application-specific solutions often get acquired by large global players seeking to grow and diversify quickly. 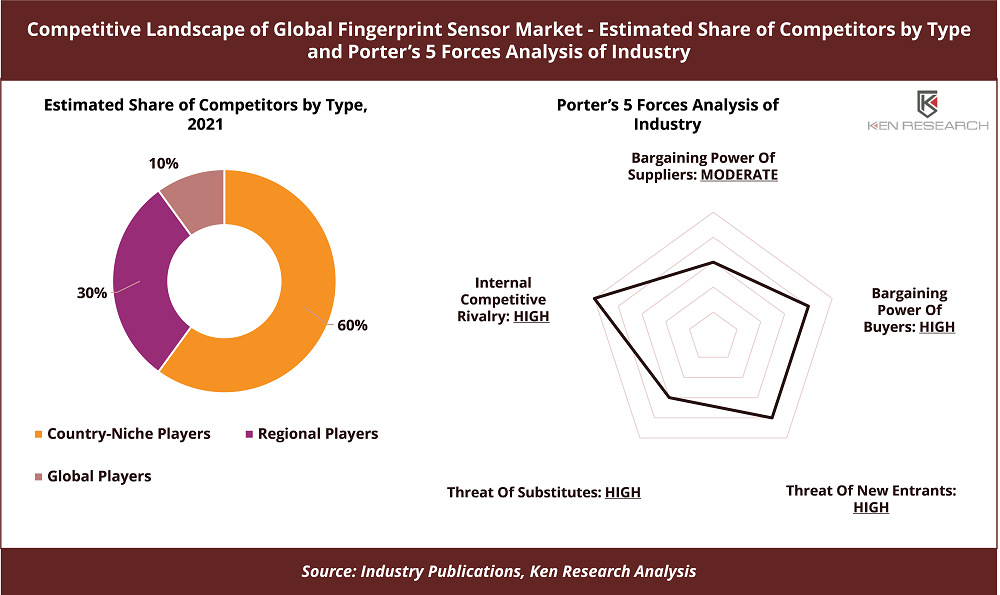 The Global Fingerprint Sensor Market is forecasted to continue moderate growth, which is primarily driven by the rising adoption of biometric fingerprint Sensors for accurate identification, faster access, and higher security. The market size is estimated to be US$ 5 Bn in 2022 and is expected to reach US$ 9 Bn by 2028 growing with a CAGR of 10%. North America is the dominant region in terms of revenue generation; however, the Asia Pacific region is expected to grow at a higher pace. Though the market is highly competitive with ~300 participants, few global players control the dominant share and regional players also hold a significant share.

Ken Research has recently published report titled, Global Fingerprint Sensor Market Size, Segments, Outlook, and Revenue Forecast 2022-2028, Market is segmented by type, application, end-user industries, and geography. In addition, the report also covers the market size for each of the four regions of the Global Fingerprint Market. The revenue used to size and forecast the market for each segment is US$ Billion.

Share
Facebook
Twitter
Pinterest
WhatsApp
Previous articleThe Quick Commerce Market of Saudi Arabia is expected to witness a surge by 2026F, demand for quick deliveries & greater transparency will positively affect the Market: Ken Research
Next articleGlobal Grease Market is expected to record a CAGR of ~5% and to reach a size of US$7 billion by 2028: Ken Research
RELATED ARTICLES
Technology and Telecom