Global Ethernet Controller Market size is expected to reach US$ 15 Bn in 2028 growing with a CAGR of ~7%: Ken Research 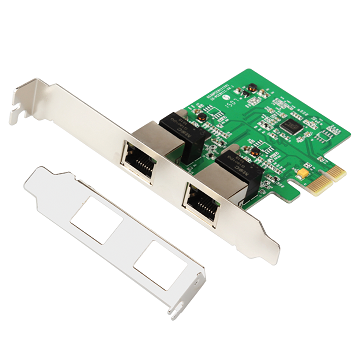 An ethernet controller is a networking device that allows data communication in a network. Ethernet is among the widely used data transfer and communication technology in data centers, cloud computing, gaming, and personal computing. Due to the stable data transfer and communication in ethernet technology, it has seen wide adoption in servers and embedded systems. Moreover, as the trend of (Over-the-Top) OTT is increasing, the demand for seamless file or video streaming is taking place, which in turn is fueling the growth of high-end ethernet controllers.

According to Ken Research Analysis, the global ethernet controller market was valued at US$ 8 Bn in 2017. In recent years, the use of cloud solutions has seen rapid growth in IT, Telecom, and healthcare among others due to which the market size is estimated to be US$ 11 Bn in 2022. The market size is expected to reach US$ 15 Bn in 2028 growing with a CAGR of ~7%.

The global ethernet controller market is driven by various factors including the increased use of servers in data centers. The surging number of OTT broadcasting service providers and traditional broadcasters is another factor driving the market growth.

In the Global Ethernet Controller Market, the Fast Ethernet segment held the largest market share in 2021. 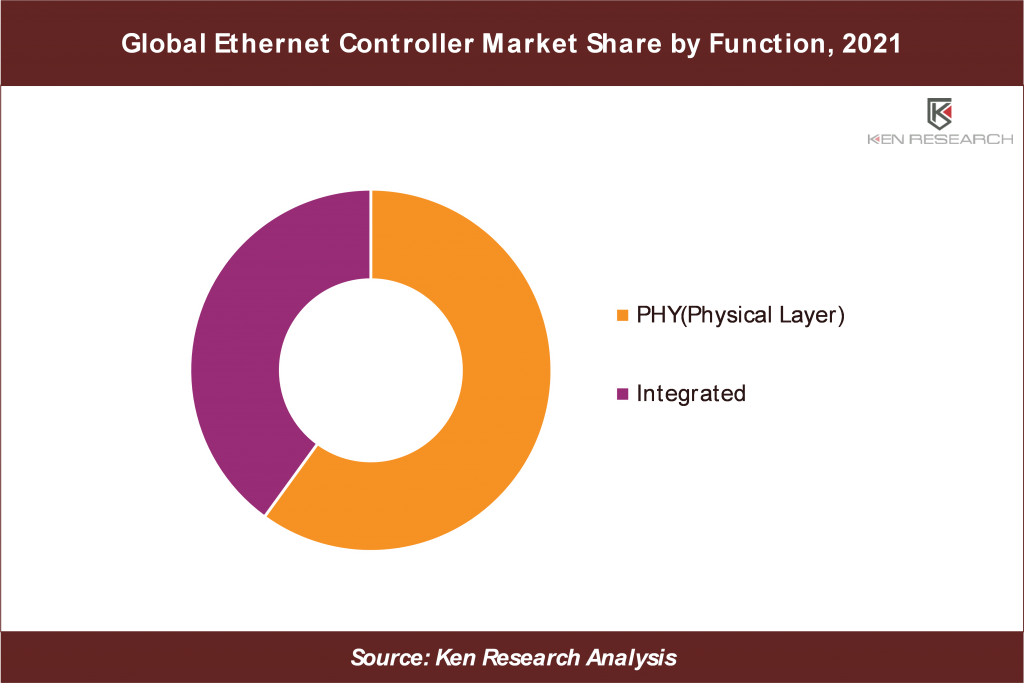 By Application: In the Global Ethernet Controller Market, the servers segment held the largest market share in 2021.

North America held the largest market share in 2021 in the Global Ethernet Controller Market. The primary factors contributing to the region’s high demand share include advancements in IT infrastructure, and an increase in the number of connected devices, and data centers. 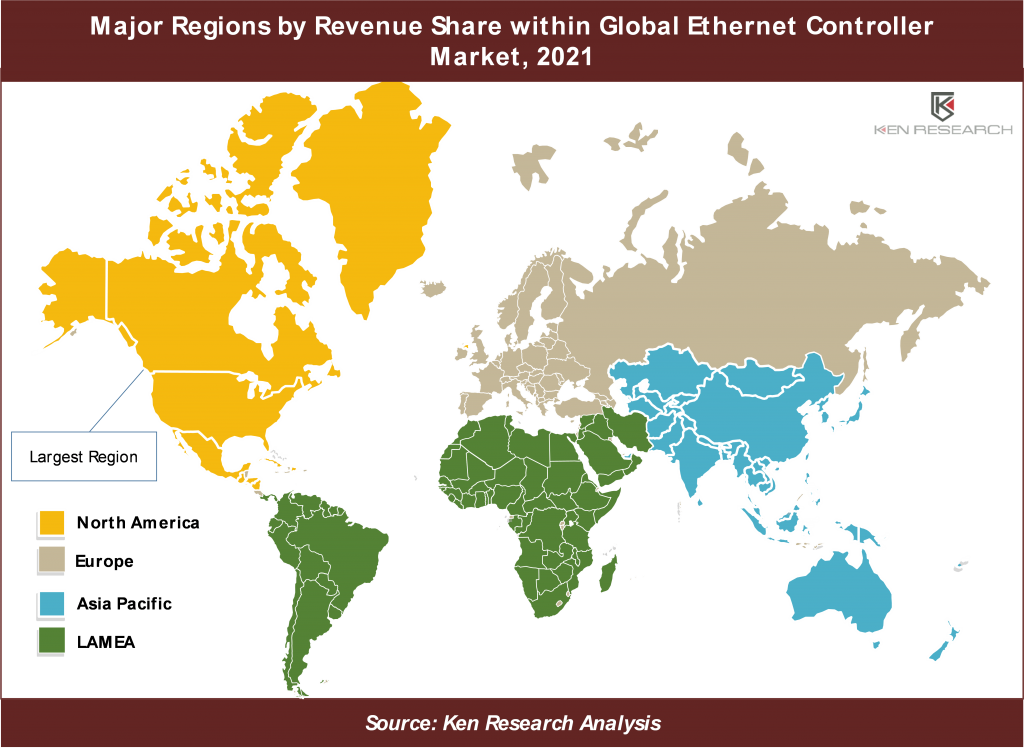 To more regional trends, Ask for a Customization @ https://www.kenresearch.com/ask-customization.php?Frmdetails=NTk2MDA4

The global ethernet controller market is highly competitive with global, regional, and country niche players with the latter holding the largest share in terms of the number of competitors. It is estimated in Ken Research’s study that the market comprises nearly 250 players across the four major regions. It is also observed that the Asia Pacific region holds the highest number of country niche players, especially in China, Taiwan, and Korea. The leading global players generally have a long-term trade agreement with limited suppliers which allows them to maintain their position and brand awareness. Most of the country-niche players are start-ups in the Ethernet Controller market.

The Leading Country Niche players such as Netgear, Lantronix, Nomadix, and Extreme Networks are highly focused on providing a significant number of Ethernet Controller Solutions. 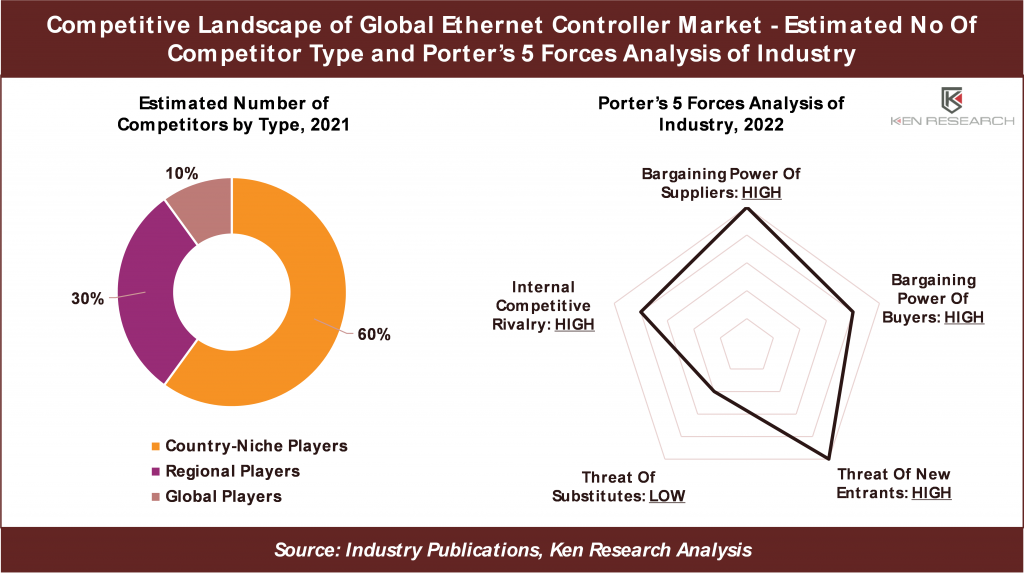 The Global Ethernet Controller Market is forecasted to continue moderate growth, which is primarily driven by the need for high precision and advancement in the banking, healthcare, retail, and logistic industries. The market size is estimated to be US$ 11 Bn in 2022 and is expected to reach US$ 15 Bn in 2028 growing with a CAGR of ~7%. North America is the dominant region in terms of revenue generation; however, the Asia Pacific region is expected to grow at a higher pace. Though the market is highly competitive with ~250 participants, few global players control the dominant share and regional players also hold a significant share.

Note: This is an upcoming/planned report, so the figures quoted here for the market size estimate, forecast, growth, segment share, and competitive landscape are based on initial findings and might vary slightly in the actual report. Also, any required customizations can be covered to the best feasible extent for Pre-booking clients and the report delivered within a maximum of two working weeks.

The Global Ethernet Controller Market Size, Segments, Outlook, and Revenue Forecast 2022-2028 is segmented by bandwidth type, function, application, and geography. Fast Ethernet and switch ethernet are widely used ethernet controller types based on bandwidth. In addition, the report also covers the market size for each of the four regions of the Global Ethernet Controller Market. The revenue used to size and forecast the market for each segment is USD billion.

Share
Facebook
Twitter
Pinterest
WhatsApp
Previous articleIndia Diesel Generator Rental & Leasing Market is in the Growing Stage; being driven by government initiatives in manufacturing sector along with growing foreign investments and technological advancements: Ken Research
Next articleGlobal Nutraceuticals Market is estimated to be ~US$ 350 billion in 2022- 2028 – Ken Research
RELATED ARTICLES
Technology and Telecom