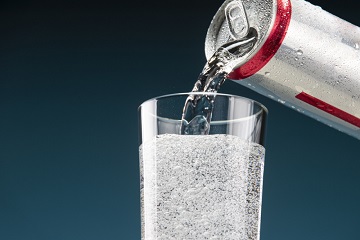 Global Hard Seltzer Market is expected to record a positive CAGR of ~12% during the forecast period (2022-2028) and is expected to reach nearly US$ 18 billion by 2028, owing to the increasing demand for low-alcoholic beverages among sober-curious and others consumers. Additionally, change in drinking patterns and rising adoption of low-calorie content, natural ingredient, and less-sugar content beverages among consumers are further expected to fuel the growth of the market.

Increasing adoption of western culture coupled with rising preference for flavored alcoholic beverages among young consumers is anticipated to propel the growth of the Global Hard Seltzer Market during the forecast period. 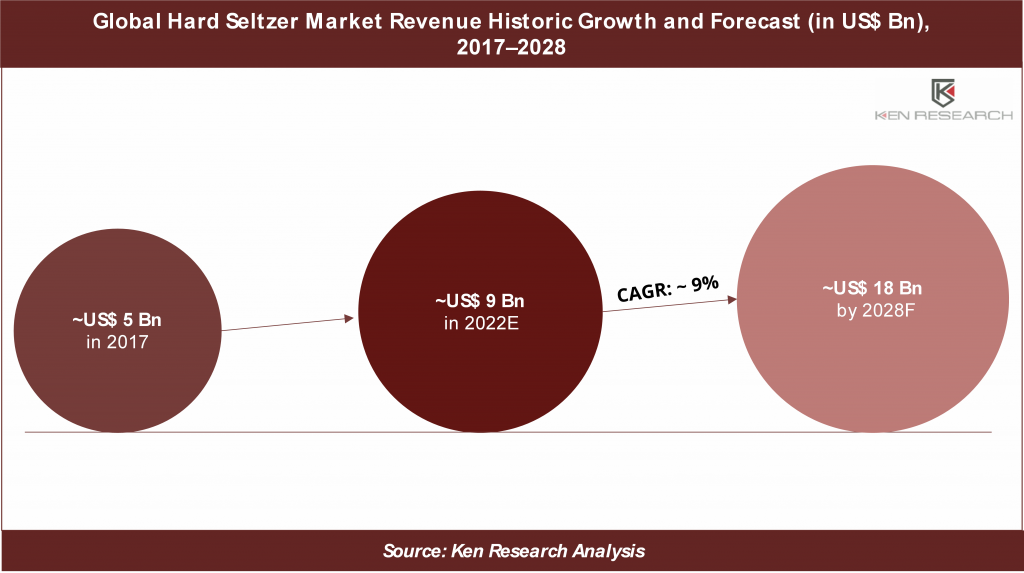 The Global Hard Seltzer Market faces challenges due to the stringent regulations laid by governmental bodies on hard seltzer products.

The COVID-19 pandemic drastically impacted the Hard Seltzer Market owing to the strict lockdown impacted the import and export, the manufacturing process of hard seltzer as well as the limitations on social gatherings in the initial stage have dropped the demand for hard seltzer. In the second stage, the demand for hard seltzer rose significantly as hard seltzer drinks were easily available on e-commerce channels like Drizly, Minibar, and others. Moreover, the outbreak impacted the consumption pattern of alcoholic beverages among consumers and increased the demand for low-calories, low-alcohol-content beverages among consumers, which has benefitted the growth of the Global Hard Seltzer Market.

By ABV Content: ABV more than 5% segment held the largest share of the Global Hard Seltzer Market by type in 2021, owing to the growing trend of moderation among consumers.

By Flavor: The lime segment accounted for the largest share of the Global Hard Seltzer Market in 2021, attributed to increasing consumer preferences for sour and fruity flavors in alcoholic beverages.

By Packaging Type: Cans segment accounted for the largest share of the Global Hard Seltzer Market in 2021, owing to its lightweight and easy-handling packaging.

By Distribution Channel: Supermarkets/hypermarket segment accounted for the largest share of the Global Hard Seltzer Market in 2021, due to the high customer reach, wide availability of different brands in one place, a large consumer base, and the capacity to hold multiple users simultaneously. 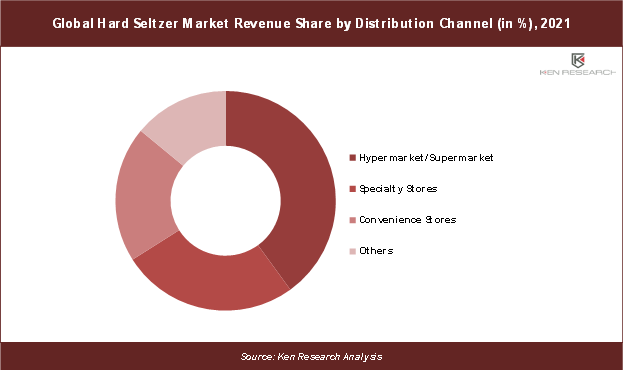 By End-User: Consumers segment accounted for the largest share of the Global Hard Seltzer Market in 2021, attributed to the increasing popularity of strong carbonated drinks with low-alcohol content and a variety of flavors.

By Geography: North America region accounted for the largest share of the Global Hard Seltzer Market in 2021, owing to the rising consumer awareness regarding hard seltzer and the presence of major brands in the region. 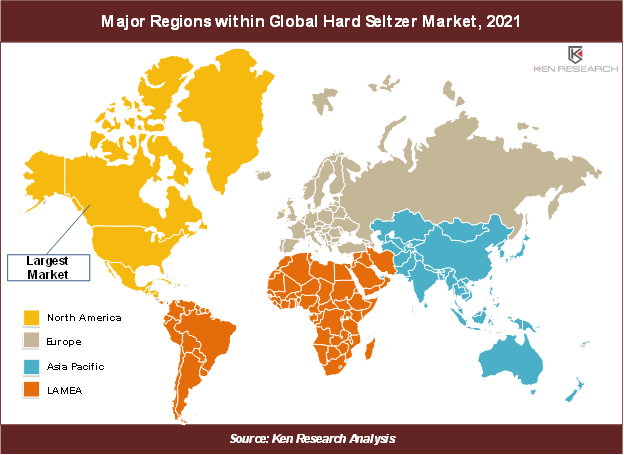 The Hard Seltzer Market is significantly competitive with ~150 players that include globally diversified players, regional players as well as a large number of country-niche players having their niche in Hard Seltzer.

Regional players comprise ~55% of the total number of competitors, while the country-niche players comprise the second highest of the total number of competitors. Some of the major players in the market include Anheuser-Busch InBev, White Claw Seltzer, The Boston Beer Company, San Juan Seltzer, Hard Seltzer Beverage Company, LLC, BON V!V, THE SMIRNOFF CO., Blitz-Weinhard Brewing Company, Molson Coors Beverage Company, and Corona Seltzer among others.

The leading global Hard Seltzer companies such as Anheuser-Busch InBev, White Claw Seltzer, and BON V!V are highly focused on introducing new products with interesting flavors in the market and promoting their products on social media. 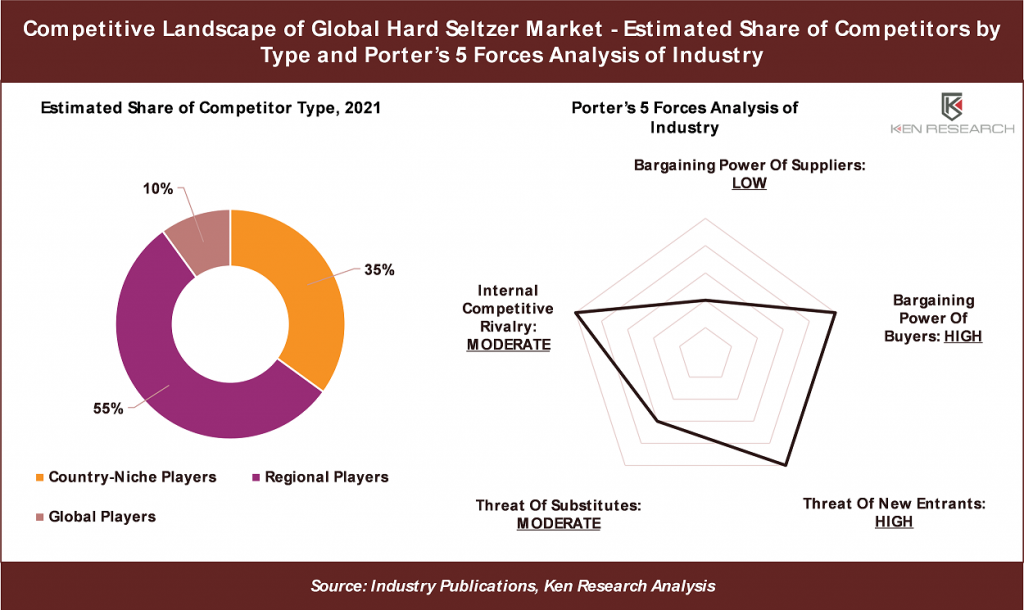 The Global Hard Seltzer Market is forecasted to continue exponential growth, primarily driven by the growing demand for low-calorie, less-sugar, natural-flavored alcoholic drinks among young consumers. In addition, increasing consumption of strong carbonated drinks, especially among sober-curious consumers coupled with the rising popularity of hard seltzer as a status symbol among millennials is likely to augment the growth of the market. Though the market is highly competitive with ~150 participants, regional players control the dominant market share.

Note: This is an upcoming/planned report, so the figures quoted here for a market size estimate, forecast, growth, segment share, and competitive landscape are based on initial findings and might vary slightly in the actual report. Also, any required customizations can be covered to the best feasible extent for pre-booking clients, and the report delivered within a maximum of two working weeks.

The China Catering Market is witnessing a steady recovery from the disruptions induced by the Global pandemic during the year 2020-2021: Ken Research

Buy Now Chain Structure; Chain operation had become the fastest-expanding business model for the catering industry in China. In 2020, the revenue generated from larger...
Read more