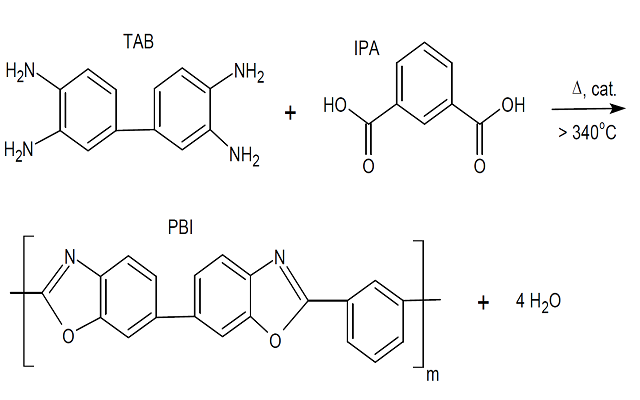 Polybenzimidazoles(PBI) are polymer with benzo heterocyclic rigid chain. These are majorly attained from condensation and cyclization of aromatic amine and diphenyl phthalate. In molten state they react with strong polar solvents. PBI fiber is the synthetic fiber, possessing an extraordinary thermal and chemical stability, low melting points, and high stability at elevated temperatures. PBIs are inflammable in air due to high moisture content this leads to their widely used for making protective wears such as protective gloves, aeronautical suits, aircraft wall fabrics, protective gloves, and welder’s apparel. The PBI’s based fibersare manufactured by a dry spinning process utilizing dimethylacetamide solvent and tetra-aminobiphenyl and diphenylisophthalate reactants.

The PBI’s are used over the military based application at the starting, and now the applications have further covered the semiconductor, membranes, petrochemical and many other fields. This PBI fiber based space suits also exhibit some of other key properties associated to low melting point, inflammability, high strength, and resistance to mildew, abrasion, and chemicals.

The polybenzimidazole fibers are stable at high temperatures and are also considered as the ideal materials as fire blocking apparels, flame retardant fabrics and as the safety gloves.

The polybenzimidazoles market is driven by increase in demand for PBI fiber in high temperature applications such as electrical connectors in aircraft engines, high heat insulator bushings, and valve seats, followed by rise in the manufacture of protective apparel such as protective gloves, welders’ apparel, astronaut space suits, and fire fighter suits owing to its high thermal and chemical stability. However, extra ordinary production cost may furthers way the market growth. Moreover, increase in research activities and mergers & acquisitions (M&A) is a key opportunity for market.

Based on geography, the North-American is a leading region in global polybenzimidazoles market owing to increase in demand for PBI fiber in automotive and aerospace industries in the region. Whereas, the European region estimated to witness higher growth rate due to increase in demand for technologically advanced aircraft wall clothing and automotive valve seats with exceptional electrochemical & mechanical properties over the forecast period. Additionally, the Asian-Pacific regions is also estimated to witness higher growth rate as a result of rapid industrialization, capacity expansion by various U.S. based manufacturers coupled with surge in demand for production of light weight and increase in demand for safety & security over the forecast period. In near future, it is projected that the market will be reached at rapid pace on account of expansion in the automotive industry, stringent government regulations and increase in awareness about benefits of PBI fiber during the forecast period.