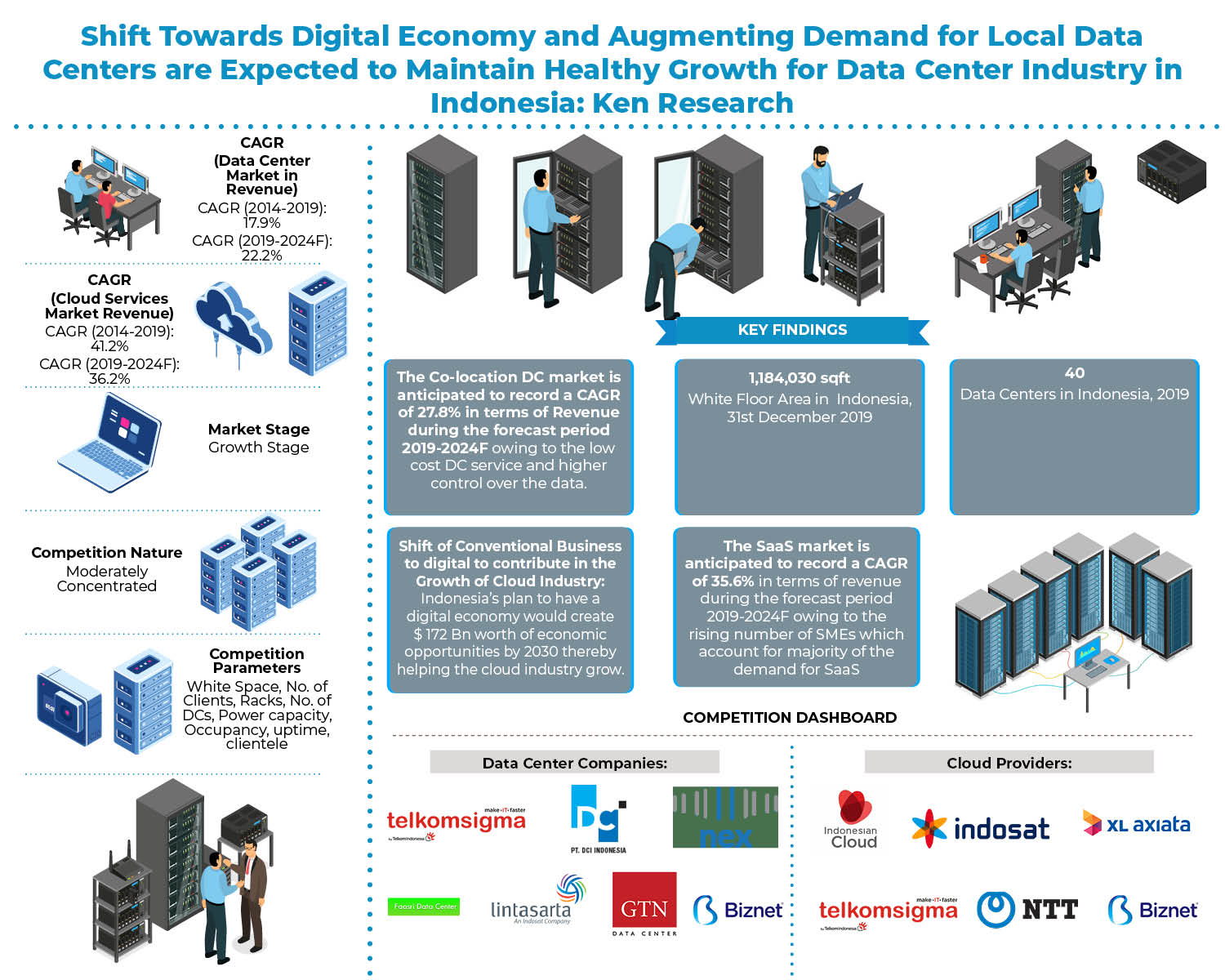 What Is the Competition Scenario In The Indonesia Data Center Market?

Competition within the Indonesia data center market was observed to be moderately concentrated along with the presence of both local and global data centers. Indonesia recorded a total of 40 data centers in Indonesia in the year 2019. The major companies in the data center industry in Indonesia includes Telkom sigma, Biznet, XL Axiata, Nexcenter, Faasri Utama sakthi, Aplikasi Lintasarta, Neuviz DC, GTN Data Center, PT CBN Nusantara (Nex Data Center) and others.

How Is The Indonesia Cloud Industry Positioned?

The Cloud Services Market in Indonesia is at a nascent stage and was observed to grow at a double-digit growth rate during the review period 2014-2019. The Indonesian cloud services market in terms of Revenue has increased at a positive CAGR of ~% during the review period 2014-2019. Growing mobile consumption and increasing demand for disaster recovery services driving the cloud market in Indonesia. Global cloud providers are developing their own data centers in Indonesia as the end-users are insecure due to the protection of govt. regulations. Indonesia has a huge potential for the cloud industry owing to which the global cloud players are entering and investing in Indonesia to tap the market.

By Type of Services (SaaS, IaaS, PaaS and others): Software as a Service (SaaS) was observed to be dominating the Indonesian cloud market in terms of revenue. SaaS constituted a market share of ~% in terms of revenue in the year 2019. The SaaS market is leading in Indonesia owing to the higher cost benefits and rising demand from SMEs in Indonesia.

By SaaS (Large Enterprise and SMEs):  Large enterprises dominated the SaaS industry in Indonesia with a market share of ~% owing to the higher usage of SaaS service by the end-users. It is anticipated that by next few years SME would be the dominator of the Saas market in Indonesia.

What Is The Competition Scenario In The Indonesia Cloud Service Market?

Over the forecast period 2019-2024F, the Indonesia Data Center Revenue is further anticipated to increase to USD ~ Million by the year 2024F, thus showcasing a CAGR of ~%. The number of data centers in Indonesia are forecasted to expand from ~ units of data centers 2019 to ~ units of a data center in 2024F, growing at a Compound Annual Growth Rate (CAGR) of ~%. Government initiatives, awareness of DC services, growth in e-commerce transactions, and development of e-govt. services are contributing to the growth of the data center industry in Indonesia.

By Type of Data Centers:

No of data centers in Indonesia

Global Printer Market Is Expected to Witness A CAGR Of ~6%: Ken Research

Buy Now What is the Size of Global Printer Industry? Global Printer market is growing at a CAGR of ~% in 2017-2022 and is expected to...
Read more
Technology and Telecom

Cloud Services, Artificial Intelligence, and the introduction of 5G are increasing data consumption, which is driving the Data Center Market in Morocco: Ken Research

Buy Now 1.  Morocco’s data center industry grew at a CAGR of 5.9% in 2022 owning to the deployment and promotion of technologies such as...
Read more