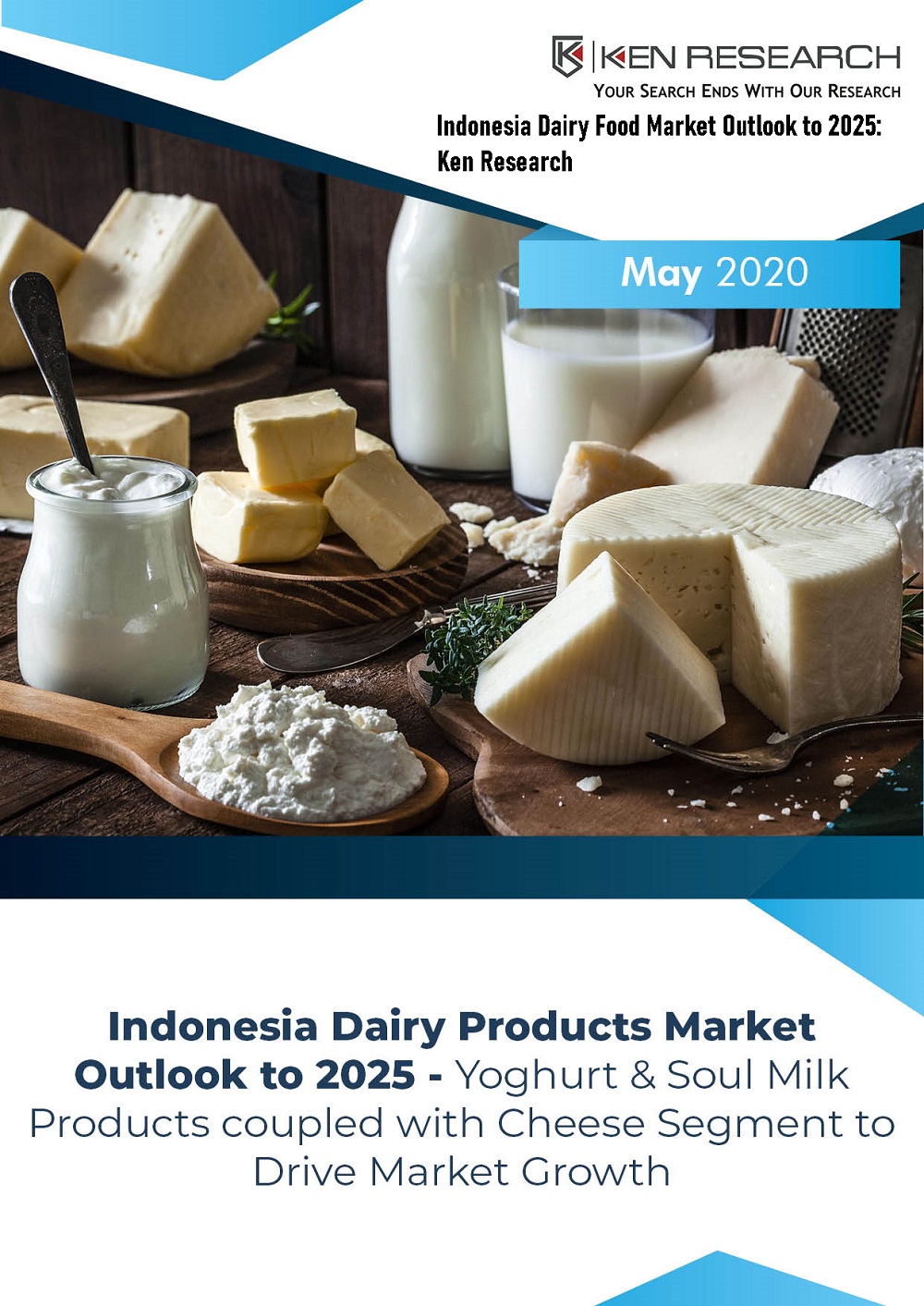 Indonesia dairy food market grew at a volatile growth rate over the review period 2013-2019 and was further supported by increase in health awareness among the consumers, introduction of new product / flavor variants in the dairy market, affordable pricing and others. Expansion of large scale integrated dairy farms in Q4’2017 led to increase in fresh milk production from 633 million liters in 2017 to 659 liters in the year 2018. The dairy processing industry used 601 million liters in 2017 for a variety of products including pasteurized / UHT Liquid Milk, Powdered Milk, Yoghurt, Butter, and Cheese. Entry of several foreign players have also contributed towards the same coupled with growing snacking trend in the country. Smaller or single-serve primary packaging products saw increasing demand and remained more popular and common in yoghurt than large or family-sized formats.

Ice-Cream-Frozen Desserts, Cheese, Cream, Butter & Spreads and Coffee Whiteners): Strong growth was observed in the drinking milk industry majorly due to increasing consumption of milk coupled with rise in milk imports. Generally, all live dairy cattle are imported from Australia, which is the only country with live dairy cattle import protocol with Indonesia. On the other hand, some local dairies augment their breeding programs with genetics imports from the US. Drinking milk segment held a higher share in 2019 owing to the consumption of fresh milk as a raw product for other dairy food segments. Whereas on the other hand, coffee whitener held the lowest share in the market due to its low product awareness in Indonesia.

The drinking milk products market was observed to be in its growing stage alongside witnessing massive growth over the years. Retail channels including hypermarket and supermarket chains were the most prominent distribution channel for the milk products segment. It is further classified into flavored milk drinks, powdered milk, liquid milk, and other milk alternatives. Launch of newer products like Homesoy, Blue Diamond Almond Breeze and Hershey’s Soy Fresh in multiple flavors including Cookie’Cream. Fonterra supplied 88.0 thousand metric tons of milk, including 24.0 thousand tons of powdered milk, 23.0 thousand tons of skimmed milk powder, and 13,000 tons of cheese in the year 2019. Competition stage was observed to be moderately fragmented with major players competing on the basis of quality, pricing, product variety, and other factors. Major players include Nestle, Royal Friesland Campina, Greenfields and others with Nestle leading the market in terms of sales revenue by value in 2019. Owing to their higher availability, production, and increase in product listings on E-commerce platforms, the online sale of drinking milk products is expected to grow over long term. Flavored milk drinks are expected to dominate in future along with maximum CAGR both in terms of value and volume during 2019-2025

Condensed milk products market was observed in its early growing stage alongside witnessing stagnant growth (value and volume) over the past few years due to stringent regulations imposed by the government. The market is further segmented into plain and flavored condensed milk products. Companies are also appealing to the price-sensitive nature of Indonesians by offering them lower-cost SCM products and creating more brand awareness on the side. Competition within the condensed milk products market was observed to be highly concentrated with major players competing on the basis of pricing, product variety, and other factors. Some of the major players include Royal Frieslandcampina, Indofoods, and others with Royal Friesland Campina leading the market in terms of sales revenue by value in 2019. Increasing focus of manufacturers towards introducing new flavored variants of sweet condensed milk; causing shift from plain SCM in the near future. However, plain SCM will still dominate in the future.

The market observed adequate growth over the years. Consumers was observed to also shift from traditional to modern retail trading thus, generating demand for yoghurt & sour milk products. They are further segmented into drinking, plain and flavored yogurt and sour-milk products. As demand for drinking yoghurt and preference for flavored products remain high, companies introduced numerous new flavored drinking yoghurt products in 2019. For instance, Yummy Food Utama’s Yofit Citrus Probiotic, fat-free orange-flavored drinking yoghurt in an easy-grip 180g container and Diamond Cold Storage’s BioKul, strawberry-flavored drinking yoghurt in a 150ml container. Competition within the Indonesia yogurt and sour milk products market was observed to be relatively concentrated with the presence of major players competing on the basis of quality, pricing, product variety, pack size, and other factors. Some of the major players include Yakult, Cisarua Mountain Dairy, Asahi Group Holdings and others with Yakult leading the market in terms of sales revenue in the year 2019. Owing to the new product innovation and additional nutritive benefit the sales are expected to grow in the near future. Both plain and flavored yoghurt are expected to see growth in the future, as yoghurt in general gains further popularity due to rising emphasis on health and wellness as corresponding awareness of benefits of consuming fermented products also increases.

Ice cream and frozen desserts market experienced growth stage alongside witnessing volatile growth rates over the years. Retail stores and outlets prove to be the leading distribution channels for the ice cream and frozen desserts in Indonesia. The ice cream and frozen dessert market are further segmented on the basis of impulse and take-home ice cream. During 2019 a survey was conducted within 5 major cities for around 2,500 respondents and Aice topped as a best-selling ice cream brand for Kids. The competition was observed to be fragmented with major players competing on the basis of quality, pricing, flavors, and others. Some of the major players include Unilever, Campina Ice cream, Alpen and others with Unilever leading the market in terms of sales revenue by value in 2019. New product launches along with the healthy variants will give a boost to the ice-cream segment in the near future. Multi-pack ice cream holds more visibility in the future with high CAGR value when compared to the Impulse ice cream segment.

Cheese market in Indonesia also experience volatile growth over the years due to shift in demand from retail to foodservice channels. Market is further segmented on the basis of processed and unprocessed cheese with spreadable and non-spreadable processed cheese, reconstituted and cream cheese, cheddar and other unprocessed cheese. 44.0% of the total consumption of dairy products include cheese, powdered milk and bakery uses. Cheese is majorly imported from New Zealand, Australia, and the U.S. The diet of Indonesians is being influenced by western cuisines with cheese as a popular ingredient.

The entry of international players such as Kraft Heinz Co., Mulia Boga Raya, Rokko Butter Co. and others have made the market competition highly concentrated in nature with Kraft Heinz Co. leading the market in terms of sales revenue by value in 2019. Owing to the product innovation along with the increase in consumer base, the sale of cheese and cheese related products is expected to grow in the near future. The sales for the year 2020 would record a dip due to the low production and availability of Cheese products in the market. Supermarket/Hypermarket are expected to be the leading distributors in Indonesia for retail sales; Indomart, Giant, Ramayana, and Hero will remain the top distributors of Cheese products.

The cream market was observed to be in its growth stage. Demand was majorly driven by foodservice channels such as cafes, bakeries and restaurants. Over 2/3rd of baked goods in Indonesia are produced by small, traditional, family-owned enterprises and SMEs. Retail sector continues to modernize by adopting the “supermarket and convenience store model” alongside promoting products on online portals. The cream segment was found to be one of the lowest contributors of revenue shares in 2019. The cream market is further segmented on the basis of fresh whipped, fresh half/single, and long-life cream.  Competition in the cream market was observed to be highly concentrated with major players competing on the basis of texture, price, and other factors. Some of the major players include Sukanda Djaya, Fonterra Brands, Greenfields, and others. Owing to the availability and long shelf life, the sale of cream is expected to grow in the near future. Growing per capita household consumption alongside surge in food service channels will collectively increase demand from chilled/fresh single cream as well as whipped cream over the long term.

Butter and spreads market were observed in a late growth stage alongside witnessing massive growth over the past few years. The market is further segmented on the basis of butter and margarine & spreads. Major importers of Butter/Spreads are New Zealand and the Netherlands. The competition in the butter and spreads market was observed to be highly fragmented with major players competing on the basis of product variety, distribution & storage channels, and other factors. Some of the major players include Upfield Holdings / Unilever, Indofood, Fonterra, and others with Upfield Holdings / Unilever leading the market in terms of sales revenue by value in 2019. The sale of butter and spreads is expected to grow in the near future owing to the increase in health awareness along with improvement in the logistics infrastructure. The margarine market is expected to be affected due to the increasing controversies of the Indonesian rainforest. Many major players have started to work on substitutes for the product or its sourcing material.

Coffee whiteners market of Indonesia was observed to be in its initial growth stage alongside witnessing low growth over the years. Foodservice channel has generated a higher demand. The coffee whitener segment contributed the least share of revenues in 2019. The market is further segmented on the basis of concentrated, powdered & nondairy creamer and liquid & NDCs. Being one of the low-cost dairy products, improved shelf stability and unique product packaging has increased the demand for NDCs. Also, the growing lactose intolerant population in Indonesia is another primary reason behind the robust demand of non-dairy creamers. Competition in the coffee whitener market was observed to be highly concentrated with major players competing on the basis of quantity, product variety, and other factors. Some of the major players include Sari Incofood Corporation, Nestle, and others. Owing to the high product awareness along with high coffee/tea consumption, the sale is expected to grow in the future. Concentrated or thick liquid NDCs with medium fat content are estimated to grow in the near future and will majorly be used towards tea and coffee applications.

Competition was again observed to be moderately fragmented, however, within some product segments it has become concentrated with the entry of international brands such as Heinz Kraft, Unilever, Yakult and others. Nevertheless, the local/domestic players have a presence in the market in terms of revenue, Product SKUs, manufacturing capabilities, and others.

Factors such as new product variants, additional nutritive value, online distribution, and shift from regular to healthy products will drive the Indonesian dairy food market in the near future both in terms of revenue and sales volume. Apart from the traditional distribution channel, numerous other sales channels will grow in the future such as Health and Beauty retailers in Indonesia.

Buy Now The Covid-19 pandemic posed challenges for the Bahrain Catering Market, but post-pandemic the industry is expected to bounce back as things go normal. Bahrain...
Read more
Business