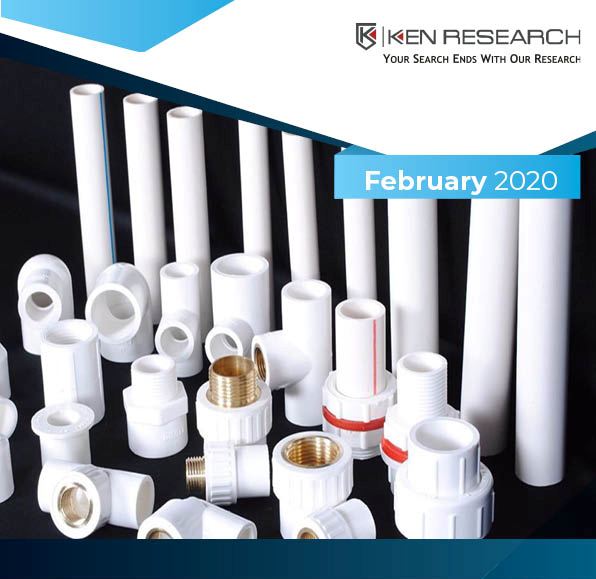 The report titled “Indonesia Plastic Pipes and Fittings Market Outlook to 2025 – By Type of Pipe (PVC, HDPE, and PP and PVDF) and By End User Application (Water Supply and Irrigation, Sewage, Mining, Cable Protection, and Others)” provides a comprehensive analysis of current and future scenario of plastic pipes and fitting industry in Indonesia. The report covers various aspects of the industry including market size in terms of sales value and volume, market segmentation based on different pipes, nature of the market structure, end-user application, competition scenario, trends and challenges, value chain analysis, trade, and regulatory scenario. The report concludes with market projections for the future of the industry forecasted in terms of sales value in USD Million and sales volume in thousand tones.

The market was observed to be in the growth stage with the demand for plastic pipes and fittings driven by demand for drinking water distribution, sanitation, housing and real estate, and infrastructure. The industry is dominated by local pipe manufacturers, with international players joining by way of joint ventures and acquisitions. Demand from government projects has driven companies to continually improve their production capacities. The market was observed to be dominated by PVC pipes due to the low price of locally available raw materials, while raw material imports for HDPE drove their average price, affecting their demand. The market grew at a CAGR of 8.5% during the period 2014-2019.

By Types of Plastic Pipes and Fittings (PVC, HDPE, and Others – PPR, PVDF): The market was observed to be dominated by PVC piping due to inherent benefits such as ease of manufacturing, installation, and anti-corrosive properties among others. Indonesia has at least 6 suppliers of PVC resin. On the other hand, HDPE production is more expensive due to the scarcity of raw materials in Indonesia, which requires greater control during manufacturing which drives the price up.

By Type of PVC Pipe (By uPVC, CPVC and PVC-O): The most commonly used PVC pipes in the market are uPVC pipes as they are commonly used for irrigation systems and pump rooms are required there, along with they are easy to install and safer than their counterparts. CPVC accounted for the second-largest share of PVC pipes due to their long term reliability, lower costs and use for potable water distribution. uPVC pipes although are non-biodegradable can be recycled for further piping applications. PVC-O and other PVC plastic pipes accounted for the remaining share of PVC pipes. Currently, only one company specializes in PVC-O production in Indonesia.

By Nature of PVC Market (Organized and Unorganized): 80% of the market for PVC pipes is organized while the remaining is unorganized. The region has up to 30 organized companies with one listed company on the Indonesian Stock Exchange.

By Type of PE Pipes (HDPE, MDPE, and LDPE): The market for PE pipes is dominated by HDPE pipes, followed by MDPE and LDPE. HDPE pipes require more know-how compared to PVC pipes, have better chemical and mechanical tolerance. These pipes are used for drinking water and wastewater transportation for residential and industrial users and irrigation facilities for agriculture. MDPE pipes are costlier than HDPE and have better chemical resistance, hence majorly used for gas transportation. LDPE pipes have the best chemical resistance and electrical insulation, thereby finding use in gas and chemical transportation and electrical conduits.

By End User Application (Water and Irrigation, Sewage, Industries, and Mining, Cable Protection Conduits and Others): Plastic pipes and fittings in Indonesia are most commonly used for water supply and irrigation. PVC and PE types are the most commonly used pipes for water supply and irrigation due to their characteristics such as ductility, temperature resistance and good immunity from corrosion. The second-highest share was for sewage applications largely due to the rising population and the awareness of sanitation and hygiene amongst the public. The PVC pipes such as uPVC and CPVC are generally used for sewerage systems as they are light, ductile and easy to install. On the other hand, Mining (Transportation of Slurry), Cable Protection (Conduit) and Others (Gas, fire equipment) accounted for the remaining share. These industries majorly use different PE pipes as these pipes are of better quality, safer and have a longer life than PVC pipes.

The competition scenario for the Indonesia Pipes and Fittings market was observed to be moderately concentrated in terms of sales volume and production capacity, with the presence of major players such as PT Wahana Wavin Jaya Rucika, Vinilon Group, Maspion Kencana, PT Avian Power, and PT Pralon among others. A major basis for the competition includes pipe prices, distribution network, end-user supply chain, the standard of the piping system followed, quality of pipes among others.

The market for pipes and fittings in Indonesia is expected to grow at a CAGR of 8.5% 2014-2019, driven by heavy investments by the Government in infrastructure and the development of the residential sector. Moreover, the sophistication of the economy would lead to a surge in demand by the people for better sanitation facilities including improved sewerage drains and safe drinking water as well as demand from industrial end-users, and a shift towards PE piping in the future.

By Type of Pipes

By Type of PVC Pipe

By Nature of PVC Market

By Type of PE Pipe

Market Segmentation on the basis of Type of Pipes, Structure of Market and End User Segment

Saudi Arabia Plastic Pipes and Fittings Market Outlook to 2022 – By Type of Pipes (UPVC, PVC  and CPVC, PE and Others) and Type of End-Use Applications (Irrigation, Water Supply and  Sewage, Plumbing, Chemical and Oil and Others)

New Zealand Plastic Pipe and Fitting Market Outlook to 2023 – By PVC, PE, Others Plastic Pipes; By End-User Application (Plumbing and Civil, Agriculture, Mining and Industrial, Telecom and Electrical and Others)

India Plastic Pipes and Fittings Market Forecast to 2026 – By PVC Pipes (UPVC and CPVC Pipes), by Applications (Irrigation, Sewerage, Water Supply and Plumbing, and Borewell Application), by Organized and Unorganized Sector and by Regions

Buy Now 1. The Kuwait hotel and restaurant sector is suffering from a shortage in the number of specialized workers including delivery services, due to...
Read more
Manufacturing And Construction