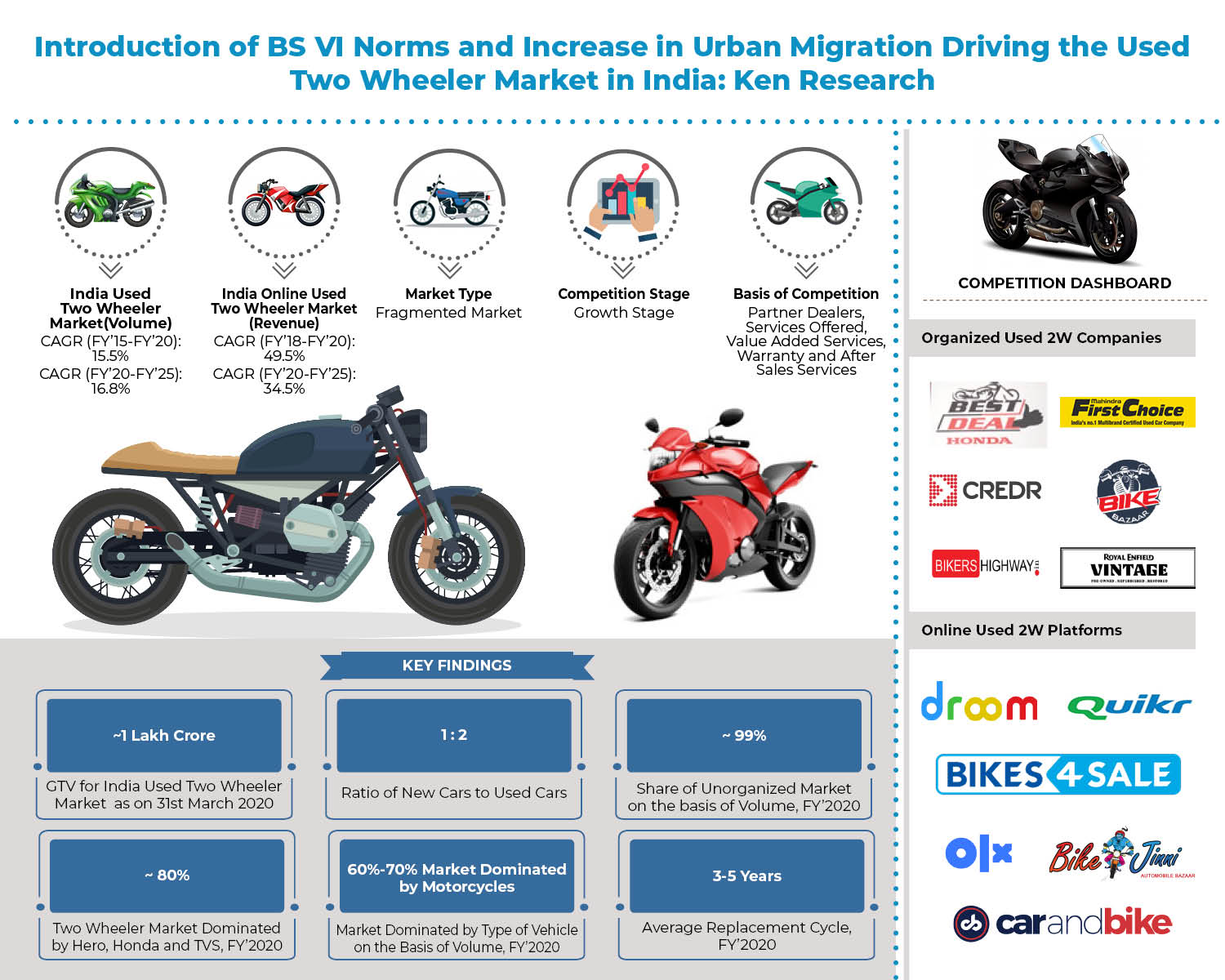 The Indian two wheelers industry has evolved in many folds in terms of technology and a total number of two wheelers being manufactured and produced. Two wheelers in India can be seen as an alternative to walking, riding bicycle,s and public transit systems. Presently, the country is the largest producer and manufacturer of two wheelers in the world followed by China. Rising fuel prices is one of the primary growth drivers for two-wheelers due to their higher fuel efficiency. In India, commuters across all age groups use motorized vehicles, especially two wheelers owing to the escalating population and rapid increase in traffic congestion, thereby making two wheelers the most appropriate and convenient mode of transportation in urban areas.

The market has attained speedy growth over the review period of five years from FY’2015 to FY’2020. The demand for used two wheelers has seen a constant rise over the past few years, especially from models like Honda Activa, Aviator, TVS Jupiter, Bajaj Pulsar, and Discover 99% of the used two wheelers market in terms of sales volume was observed to be unorganized which comprises of individual sellers, local mechanics and small dealerships.

India Used Two Wheeler Market is at the Growth Stage, with organized players increasing their market penetration. The overall market increased from ~ Mn Units in FY’2015 to ~ Mn Units in FY’2020, growing at a double-digit positive CAGR during the period.

By Type of Two Wheeler

The market has continued to be dominated by motorcycles with a massive volume share of ~% during the FY’2020. This is because male riders traveling a longer distance still prefer motorbikes instead of a scooter due to the larger engine and greater mileage offered by motorcycles.

Due to low awareness regarding the existence of organized online and offline players, the majority of transactions conducted in the market are through C2C or offline B2C channels. The C2C channel controlled a share of ~ % to the total sales volume in the used two-wheeler market during the FY’2020. On the other hand, the B2C channel controlled the remaining significant share of ~ % in the used two wheeler sales space. C2C Market is dominated by buying and selling of Used Two Wheelers between Friends and Family.

By Stock Piece and Customized Vehicles

During FY’2020, stock piece contributed to a majority of the used two-wheelers sold in India and consisted of standard vehicles manufactured by companies, thus evaluated at a volume share of ~ % in India used two wheelers market. The total numbers of individuals who are bike enthusiasts and are able to afford expensive bikes constitute a very small proportion of buyers in the market for new customized bikes, thereby capturing the remaining ~ % volume share in the FY’2020.

By Source of Manufacturing

Domestically manufactured bikes have dominated the sale of used bikes and scooters in India with a hefty share of ~ % in the sales volume during FY’2020. Since India is a middle-income country, price and mileage are the most important factors that Indians consider before purchasing a new vehicle. This is the major factor behind domestic companies focusing on the production of low maintenance and high-performance bikes and scooters.

On the basis of engine capacity of two-wheelers, it has been observed that used bikes with 100-110 cc engine capacity have been mostly purchased by buyers. The share of this segment in the volume sales was noted at ~% during FY’2020. On the other hand, engine capacities with 125-135 cc, 150-200 cc and others were observed to capture the remaining ~% volume share in the FY’2020.

It has been observed that presently, Indians mostly use a two-wheeler for at least a period of three to five years before disposing it off. This figure has dropped from an average of six to seven years in the recent past due to frequent launches of two wheelers and effective marketing techniques used by companies.

By Type of Market

By Type of Bike

Major players and their business models

For More Info on the Research Report, Click on the Below Link: –

Saudi Arabia Used Car Market Outlook to 2025-By Market Structure, By Type of Car, By Brand, By Age of Vehicle, By Kms and By Region