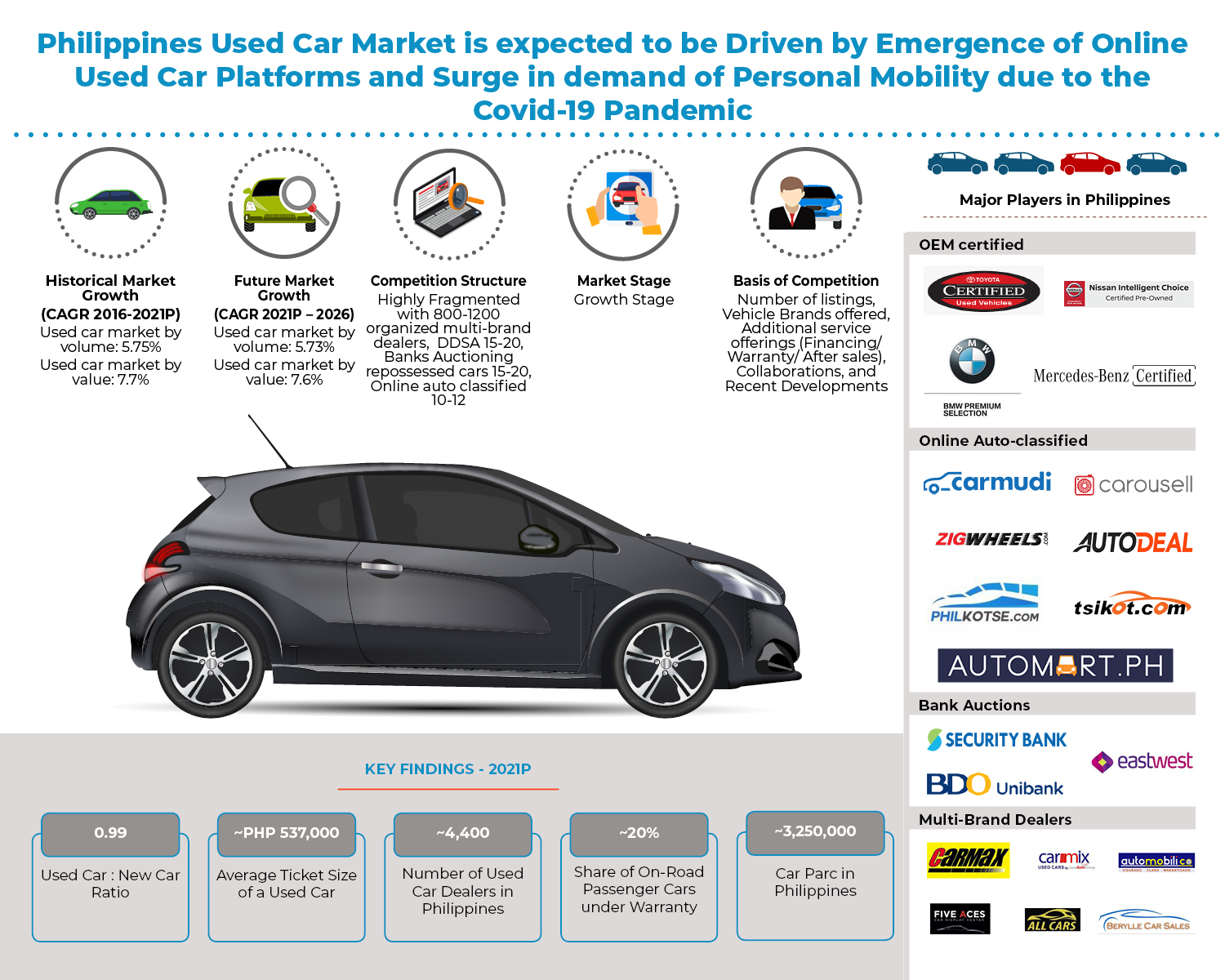 How is the Philippines Used Car Market Positioned?

Overview: The Used car market in Philippines is quite fragmented amongst the unorganized players in the industry. There has been a surge in the demand for private vehicles given the social distancing protocols being imposed in the Philippines making it quite risky to use the public transport. Factors such as increasing purchasing power, easy availability of finance, and increased prices of new cars due to Government imposed higher taxes have positively contributed to the growth in the used car market revenue. Increased digitalization and internet penetration and emergence of online players are critical factors in boosting the used cars sales as they have made the overall process of selling and buying used cars quite convenient and prompt.

The buying decision of the customers is dependent on key parameters such as the price, model, brand value, age, mileage, and so on. Philippines’ automotive market is primarily driven by foreign brands.

There has been a surge in the demand for quality cars, warranty packages, after-sale services, and other value added services, as several the new car potential buyers are gradually moving towards the used cars segment.

Yet, the freelancers and the independent sellers (Customer to Customer) transactions still constitute a lion’s share in the market due to their lower prices.

The used cars market showed resilience during the economic crisis brought down on the country by the pandemic in the year 2020. While the new cars market witnessed a tremendous decline, the used cars market experienced a very slight decline from the previous year in terms of sales. Most of the used car market losses were compensated for once the Enhanced Community Quarantine (ECQ) measures were eased and people were required to travel from one place to another while maintaining social distance. Since travelling public transport implied violation of these protocols and risk to health, a lot of people started buying used cars.

By Sales channel:  Most of the market is dominated by the multi-brand dealerships in the organized B2C segment.  OEMs (DDSs) and banks constitute a very small share of the organized ‘Used Car Market in Philippines’

By Source of Lead Generation:

In Philippines, online platform is the most preferred method for lead generation for organized players. It also offers a display of large variety of used vehicles on a single click and allows person to compare different vehicles at the same time.

By Price: The price range of PHP 300k-500k accounted for highest percentage share of used cars in Philippines in 2021P.  Sedans are the most popular car models preferred in Philippines, and a vast majority of them lie in this price range.

By Brand: Toyota has the highest share in the used cars market. Other Japanese brands such as Mitsubishi, Hyundai, Nissan, etc., have captured a very high proportion of the total market.

By Region: Metro Manila holds the highest market share for used cars. The NCR region has cities such as the Quezon City, Manila, Paranaque, and so on which are highly developed and crowded as compared to the rest of the cities in Philippines. The deteriorating public transport in these major cities was one of the factors contributing to increased sales of used cars in the Philippines. With the onset of the pandemic, the need for personal cars increased manifold.

Most Filipinos prefer buying the used car from a dealer. However, with increasing internet penetration, the online sale for used car has been gaining traction in the last few years. Facebook plays a key role in expanding the used cars market in Philippines. Emergence of online auto-portals and classified platforms such as Carousell, Carmudi, AutoDeal, Philkotse, Automart, etc., have provided increased visibility and facilitated the sale of used cars. However, there is no organized platform for direct B2C & C2C online offering for used car sales currently. Prominent C2B car players such as Carsome are planning to enter the Philippines in the near future.

Used Car Market in Philippines is highly fragmented as majority of the market is unorganized. There exists intense competition in the highly fragmented market with various OEM certified, brand authorized dealerships, multi-brand outlets & independent (standalone as well as clustered dealers) operating in the industry. The repossessed car market in Philippines is fairly concentrated, as major banks involved in auctions are only 8-10. Used car dealers in Philippines compete on the basis of number of dealership outlets; value added services, quality checks performed, insurance and finances and portfolio of used cars at their dealership store.

The used car industry in Philippines is expected to grow in the future at a single digit CAGR over the forecast period (2021P to 2026F). The market structure is expected to be consolidated in the future as the market share of players selling vehicles via organized channel is expected to surge. The average ticket size of a used vehicle is expected to increase as the average replacement period is reducing over time. The customers will tend to switch to used cars and new cars at a rate faster than before, depicting rapid change in consumer preferences. The multi-brand dealers and banks are strategically partnering with online classified pages and online auto portals to make the process accessible and transparent for the buyers. . The customers in the future will make well informed decision as lot of information will made available regarding car pricing at their disposal in the future across various platforms. Certain foreign established C2B players are too considering Philippines Used Car market a growing and profitable venture.

Singapore Used Car Market Outlook to 2025: Increasing Used Cars Demand Due to the Pandemic Contributes to Increase in Used Cars Sales during the Economic Crisis

Buy Now 1. The total retail sales in Germany was more than 500 Bn out of which 27% was carried through E-commerce Platforms Amazon.de, Zalando.de, Otto.de,...
Read more
Automotive, Transportation and Warehousing

Germany E-Commerce Market is expected to grow at 5.2% CAGR over the forecasted period 2021-2026F: Ken Research

Buy Now Germany’s population is anticipated to grow at the rate of 0.14%. The rise in online population and technological advancements is expected to...
Read more
Automotive, Transportation and Warehousing