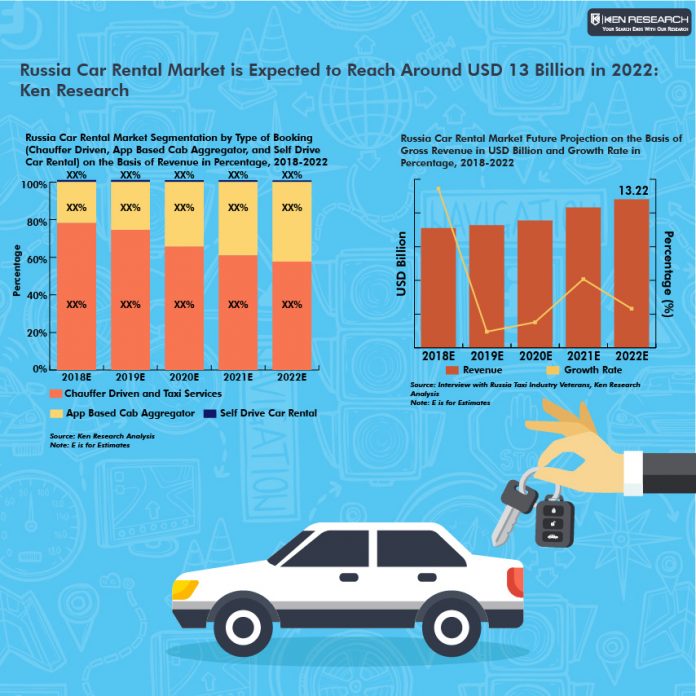 The report is useful for car manufacturing companies, taxi companies, potential entrants and other stakeholders to align their market centric strategies according to ongoing and expected trends in the future.

Market Size: Taxi business in Russia is moving towards the organized sector with increasing participation of drivers opting for registered taxis and permits. Post 2014, using a taxi in Moscow has become ~% cheaper and the estimated average waiting time is reduced to ~ minutes in 2017. The car rental market size has increased from USD ~billion in 2012 to USD ~ billion in 2017. Growth was highest in 2016 when the three major companies Yandex Uber and Gett were competing with each other to gain more market share. The estimated number of taxis during the same period increased from ~ thousand to ~ thousand. Growth in App based market was highest.

Market Size: The market size increased from USD ~ billion in 2012 to USD ~ billion 2017 registering a five-year CAGR of ~%. Growth was mainly on account of legalization of taxi business in Moscow and other major cities. Citymobil and Vezyot were leading dispatcher taxi service providers in the country. Airport transports contributed the major part of high value taxis transports. Corporate booking for transporting company officials contributed the majority of long-term chauffer driven rental.

Future Outlook: It is expected that market for chauffer driven car rental and dispatcher taxi service will decline from USD ~ billion in 2018 to USD ~ billion in 2022. Long term and short term rental car market will largely be able to retain their market. However it is expected that majority of the transactions will move online. Majority of the dispatcher service business will be converted into app-based cab booking service. Demand for domestic tourism is on rise in Russia and it is expected to maintain the momentum in future as well. Fifa world cup 2018 is expected to boost both domestic and international tourist movement in 2018.

Cab aggregators provide the technology platform for the users to book cabs via app and charge the drivers/ car owners a commission fee (~%) of the ride amount on every ride taken through their application. The market size for app based taxi aggregator increased by more than 1,100 times from USD ~ million in 2012 to USD ~ million 2017 and registered a five year CAGR of ~%. Yandex Taxi (Combined Entity with Uber), Gett were major players in this market.

Economy cars allow upto 4 passengers make it ideal for both individuals as well as families its low cost of travel and much better facilities make it command a staggering ~% market share by revenue. Comfort class was second most popular segment followed by executive. Yandex was the largest player in Russia online cab aggregator market. In 2017, it commanded an estimated market share of ~% in Russia cab aggregator business. Gett share was estimated at ~% of the total market on the basis of gross value for booking cabs through app. Other car companies contributed ~% of the revenue which mainly included Wheely, Indrive, and Altocar.

The app-based cab aggregator market is expected to grow from USD ~million in 2018 to USD ~ million in 2022 registering a five-year CAGR of ~%.

An estimated ~ are available for rent in self-drive car rental format. The number of cars declined from ~ in 2012 to ~in 2017. Stiff competition, price war and improving substitute services were the main reason for decline.

Revenue from online booking in self-drive car rental market has increased from USD ~ million in 2012 to USD ~ million in 2017). Decline in share of offline booking was mainly on account of increased penetration of internet, ease of payment through online mode and exciting offers which can be availed by online booking. Demand from business segment was highest and accounted for ~% of the business it was followed by leisure and insurance replacement.

Market for car rental in Russia is expected to grow from USD ~ billion in 2018 to USD ~ billion in 2022 registering a five-year CAGR of ~%. Technology is expected to have very deep impact on the car rental market and it is expected that car rental services will undergo a major overhaul in next few years. Share of illegal taxis will decline to minimum, regulations governing the taxi market will become clearer and the market will become more user friendly due to improvement in technology and connectivity. Online and app-based car rental will gain significant market whether it is in cab aggregator business or in self-drive car rental market. Development and use of driverless cars are another concept on which work is in progress with significant developments.