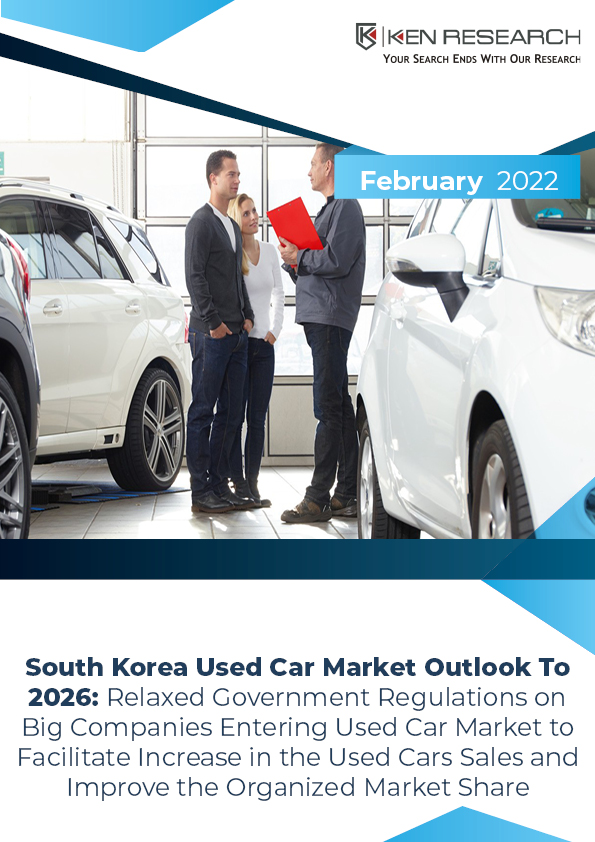 How is the South Korea Used Car Market Positioned?

~70% of the total population is under the age bracket 15-64 years supplemented by the high per capita income.

The used car market in South Korea has a highly concentrated online classifieds market and fragmented offline market. A combination of restrictions on public transport and a movement towards private travel have accelerated the sale of used cars. The Online Platforms and E- Commerce in the market benefitted the most from this sector as it grew the highest. Factors such as easy availability of finance through banks and NBFIs have positively contributed to the growth in the used car market revenue. Increased digitalization, internet penetration and relaxation of government regulations on allowing big domestic players in the used car market space are critical factors which have boosted the used cars sales.

Parameters such as the age, brand, certifications, mileage, and so on impact the buying decision of the customers. 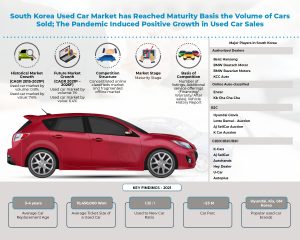 Market: Market for ‘Used Car in South Korea‘ has increased at a CAGR of ~% over the period 2015-2021P on the basis of revenue. Sales for used cars were recorded at ~units in South Korea during 2021P.

There has been a surge in the demand for quality cars, warranty packages, after-sale services, and vehicle history reports, since the used car market in South Korea has high consumer distrust.

The country saw its domestic industry – comprising of Kia, Hyundai, Renault-Samsung, GM Korea, and SsangYong – bounce back in March 2020 after seeing big declines in February, when it was down nearly, on automaker shutdowns.

By Market Structure: Organized sector accounted for the majority of share in the used car market segment. Unorganized sector, on the other hand, made for the remaining small percentage of share.

In South Korea, online platform is the most preferred method for lead generation for organized players. It also offers a display of large variety of used vehicles on a single click and allows person to compare different vehicles at the same time.

By Sales Channel: C2C sales is most the preferred sales channel in South Korea. B2C sales make up a relatively small portion of the market.

By Brand: Hyundai has the highest share in the used cars market. Another Korean brands Kia, has captured a high proportion of the total market as well.

The number of online used car portals and marketplaces have risen significantly along with rising internet penetration in South Korea over the last few years. Major dealers such as K-Cars, Aj SellCar, Autoplus and others are using online platforms to increase their sales. Hence, there was an inevitable expansion in the lead generation of used cars via the online means. Social networking sites including Facebook and Instagram play a key role in expanding the used cars market in South Korea. Emergence of online auto-portals and classified platforms such as Encar and Kb Cha Cha Cha have provided increased visibility and credibility to the customer-to-customer transactions in the unorganized segment. South Korea had one of the fastest internet networks around the world. The internet infrastructure has been a high priority in numerous governmental regulations that led to its rapid and thorough expansion, contributing positively to the growth of the industry.

Various authorized dealerships, multi-brand outlets & independent (standalone as well as clustered dealers) operating in the industry have led to increased competition in the used car market. Most multi-brand dealers are providing value added services including easy financing options, handling the paperwork and warranty, to expand their market share and to compete with authorized dealers.

The used car industry in South Korea is expected to demonstrate a low growth rate in the future. It is expected to increase at a five year CAGR of 1.0% (by sales volume in units) from 2021P to 2026F. It is anticipated that the share of the organized segment in the used cars space will increase over time owing to an expected entrance of the big finished car makers in the market. Foreign established C2B players are too considering ‘South Korea Used Car Market’ a growing and profitable venture as consumer trust is higher towards imported vehicles. The demand for imported vehicles has been on a rise, especially for German Brands such as Mercedes and BMW.

Indonesia Has Opened Their Doors For The Foreign Universities To Set-Up Their Branches In The Country Leading To An Increase In The Number Of...

Buy Now 1. Unlike other Middle Eastern Countries Indonesia has more Public Colleges than Private Colleges with more than ~50% of Public Universities To Know More...
Read more
Automotive and Automotive Components

Buy Now Philippines Lubricants Market Ecosystem The Philippines lubricants market is fragmented with too many lubricant manufacturers operating in the industry. Petron and Shell are the...
Read more
Business