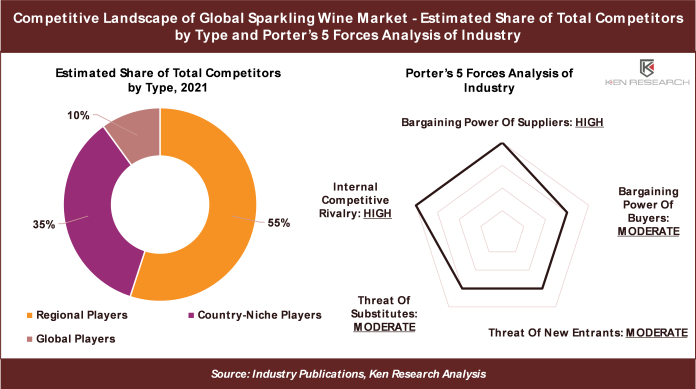 Driven By the Increasing Alcohol Socialization Among Consumers Along with The Increasing Adoption of European culture, the Global Sparkling Wine Market is forecasted to Cross US$ 56 Bn by 2028 says Ken Research Study.

Wine is an alcoholic beverage produced from fermented grape juice. Sparkling wines are carbonated wines made from black and white grapes, with carbon dioxide being a natural source byproduct of fermentation that gives them their fizzy essence. In addition, they can be white wine, red wine, and rose wine, and are produced all over the world. Some well-known types of sparkling wines include Prosecco from Italy, Champagne from France, and Cava from Spain all of which have different flavors and are made in different ways.

The Global Sparkling Wine Market is expected to witness stable growth during the forecast period, owing to the increasing alcohol socialization among consumers along with the increasing adoption of European culture. The global sparkling wine market was valued at ~US$ 28 billion in 2017, it is estimated to be ~US$ 37 billion in 2022 and is expected to reach a market size of ~US$ 56 billion by 2028 growing with a CAGR of ~7%.

Europe is the dominating region in the Global Sparkling Wine Market due to the presence of the world’s largest wine-producing countries, including France, Italy, and Spain. For instance, according to World Population Review, four countries, including France, Italy, and Spain produce more than half of the world’s wine. Italy produced 44.5 million hectoliters (mhl) of wine in 2021, followed by Spain and France, which produced 35 mhl and 34.2 mhl, respectively. 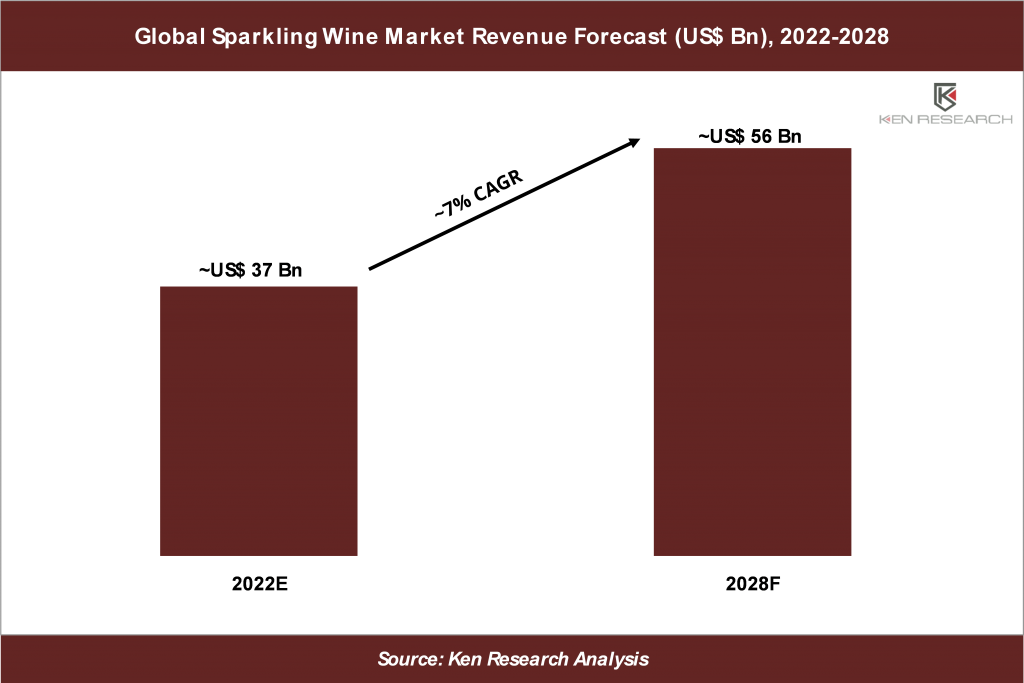 2. The Rising Socializing Trend among the Young Population, Combined with the Individuals’ Shifting Lifestyle Preferences is driving the Market Growth of Sparkling Wines.

The rapid socioeconomic changes and fast-paced urbanization, along with the continuous rise in living standards across countries are propelling the demand for sparkling wines. In addition, with rising urbanization, individuals are becoming more aware of the importance of living a healthy lifestyle, which is influencing them to adopt organic products. For instance, according to the Organic Trade Association (OTA), a membership-based business association devoted to organic agriculture and products in North America, organic wine sales in the United States surpass US$ 373 million in 2020, a 17.6% increase from 8.7% in 2019. Furthermore, the growing influence of social media in developed countries is influencing the lifestyles of Younger generations, encouraging them to spend more on high-end products, including wines. 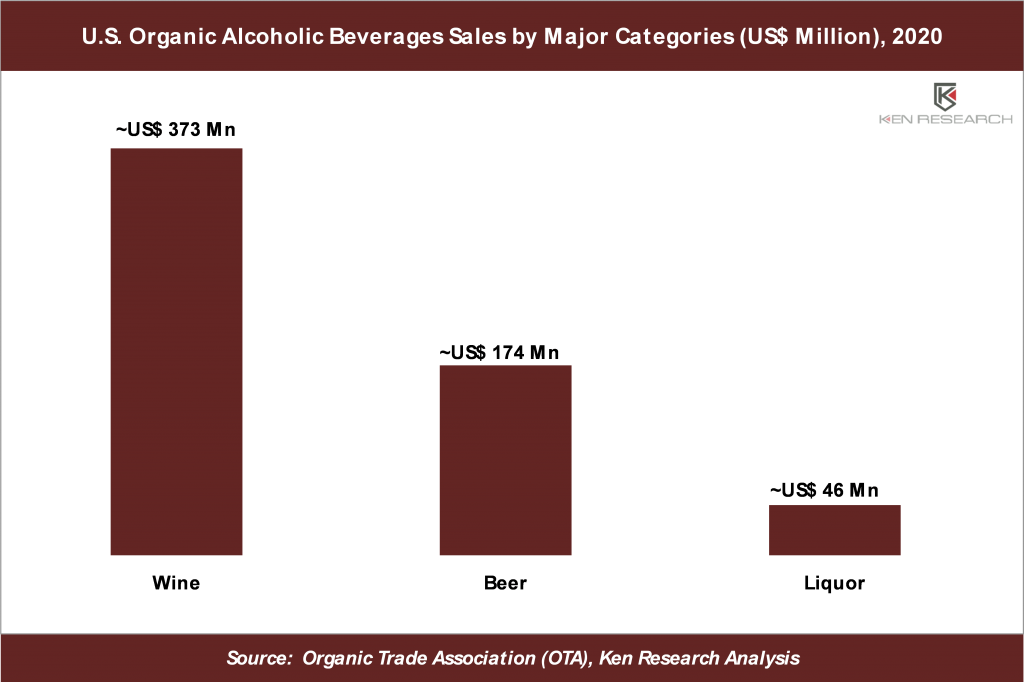 3. The Consumers’ Shifting Preferences Towards a Variety of Alcoholic Beverages, Such as Beer, Liquors, and Spirits due to their Economic Viability May Stifle the Market Growth of Sparkling Wines.

Wine’s premium cost is largely due to high taxes, both import duties and the multitude of state taxes and regulations that are applied to wines without taking into consideration that wine is a low-alcohol product that is farmer-friendly and good for health. Another factor contributing to the high cost of wines is that they are made from grapes that are grown in specific regions, primarily California and South America, resulting in higher transport and customs fees to import them. In addition, grapes are generally expensive as they require specific soil and weather conditions, while also being a seasonal crop, which raises the price of grapes and the products made with them, such as wines. 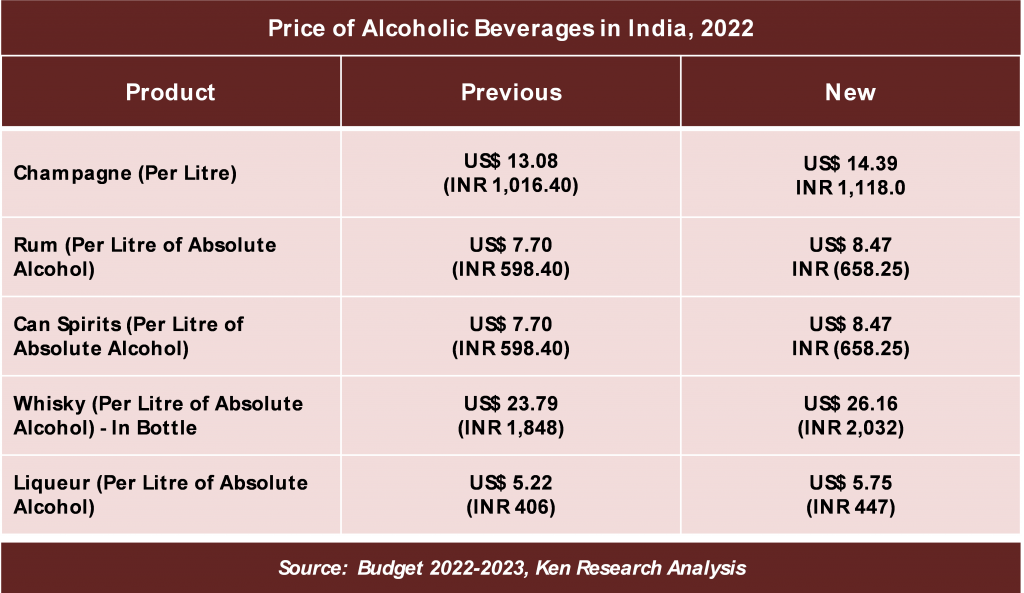