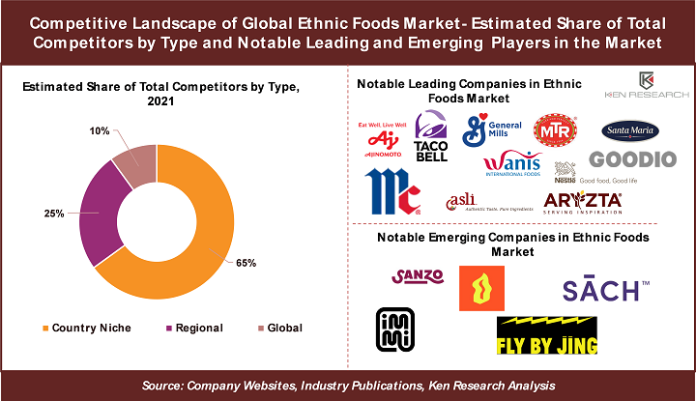 Country-Niche Players Dominate the Market Holding ~65% Share Despite the Presence of about ~1,000 Competitors Comprising a Significant Number of Regional Players and Global Players, finds a recent market study on the Global Ethnic Foods Market

Food that is specific to a particular region or community is referred to as “ethnic food.” Individuals who are not members of the respective ethnic communities view ethnic foods as cuisines derived from those communities’ histories and cultures. Chinese food, Mexican food, Italian food, etc. are just a few examples of diverse cultural cuisines that are recognized as ethnic and different from western style cuisine.

Competitive Analysis by the Ken Research Study found that the Global Ethnic Foods Market is highly competitive with ~1,000 players which include globally diversified players, regional players as well as a large number of country-niche players having their own niche in the Ethnic Foods. The country-niche players comprise about ~65% in terms of the number of companies, followed by regional players accounting for ~25% in terms of the number of companies.

To address the growing demand for a variety of cuisines from customers, key players are emphasizing on R&D and launching new products with various types of ethnic food cuisines. In addition, major firms are investing in the production of ethnic cuisines with high nutritional value due to the increasing popularity of healthy lifestyles and are also expanding their existing presence on various e-commerce stores or developing new distribution channels through their own websites.

Leading Worldwide Specialists’ Ongoing Efforts To Provide Ethnic Foods To A Variety Of Applications Like Restaurants And Household Is Likely To Boost The Market.

Detailed comparative analysis of key competitors available within the Research Study shows that specialist players like Taco Bell, ARYZTA AG, Asli Fine Foods, MTR Foods, Wanis International Food, and Santa Maria UK Ltd. are strongly focused on providing Ethnic Foods. The market is competitive, and in order to gain a competitive edge, the leading competitors are engaging in a variety of strategic operations like mergers and acquisitions, collaborations, and product releases. 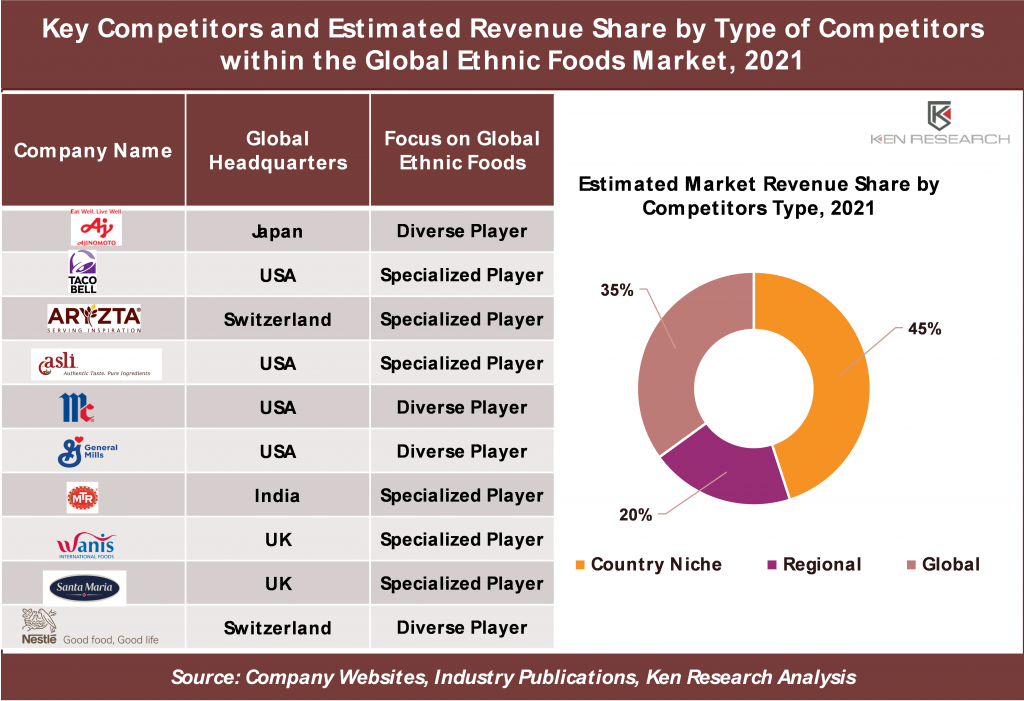 In October 2022, the Japanese government encouraged local food businesses and producers to collaborate more closely with local authorities and fundamental regional sustainability plans in order for the national green food system strategy to meet its 2030 and 2050 targets.