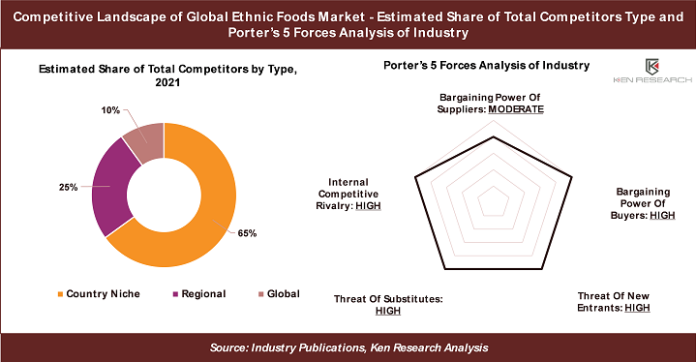 Due To the Evolution and Development of Individual Preference, Restaurant Chains That Specialize in Ethnic Cuisine Are Diversifying Food Service Operations by Preparing a Variety of Ethnic Cuisines Which is likely to Propel the Growth of Global Ethnic Foods Market, which is forecasted to Cross ~US$ 80 Bn by 2028 says Ken Research Study.

The phrase “ethnic food” describes cuisine that is specific to a particular area or population. Individuals outside of the respective ethnic communities consider ethnic foods as cuisines arising from the history and culture of certain ethnic communities. Chinese food, Mexican food, Italian food, etc. are just a few examples of diverse cultural cuisines that are recognized as ethnic and different from western style cuisine.

1. The Adoption of Creative and Sustainable Packaging by Leading Vendors Is One of The Major Trends Driving the Expansion of The Ethnic Foods Market.

The adoption of creative and sustainable packaging by leading vendors is one of the major trends driving the expansion of the ethnic foods market. Vendors in the global ethnic foods market utilize strategies to gain a competitive advantage in the market. Packaging improvements, in addition to impressing customers, help to enhance the shelf life and durability of products. For instance, Capital Foods, Nissin Foods, Associated British Foods, Unilever, Nestle, and others offer a broad selection of ethnic cuisine products with a long shelf life, including instant noodles, soups, and curries. Ching’s, a range of quick noodles, soups, Hakka noodles, sauces, and even ethnic spice blends from Capital Foods, minimizes the amount of time required for cooking.

In September 2021, the Greater Chennai Corporation in India issued a directive mandating restaurants and cafes to package food in banana leaves instead of plastic.

According to Ken Research estimates, the Global Ethnic Foods Market – valued at around ~US$ 35 million in 2017 and estimated to reach nearly ~US$ 50 million in 2022 – is further expected to grow to around ~US$ 80 million opportunity by 2028. 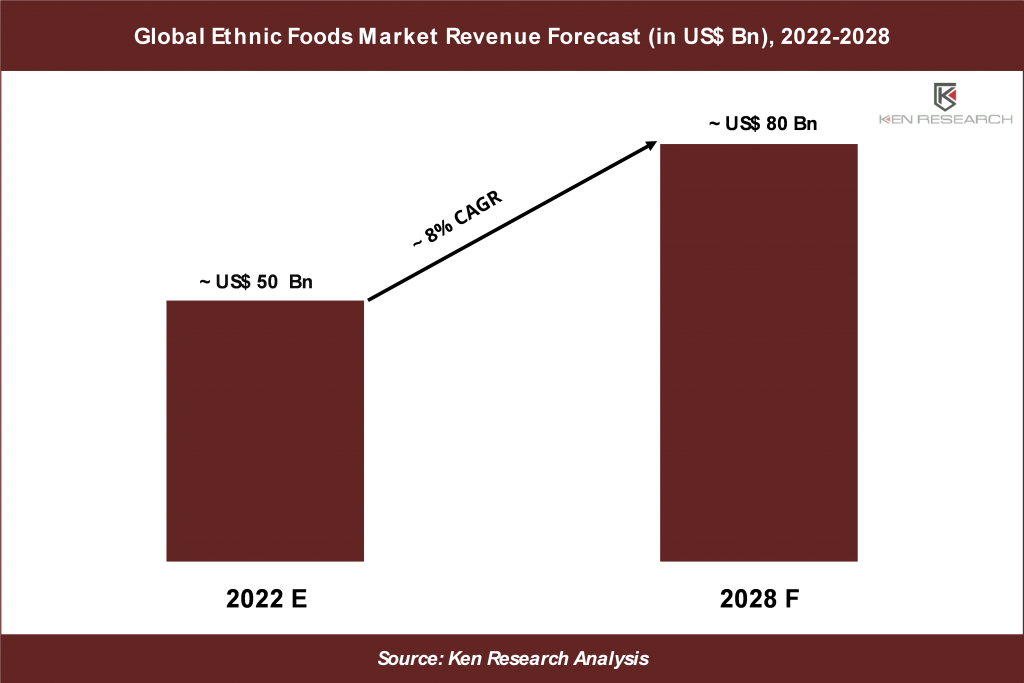 The primary driver of the expansion of the ethnic food industry is rising immigration rates. Immigration is rapidly increasing for a wide range of reasons, including job opportunities, environmental considerations, educational opportunities, family holidays, and avoiding violent conflict. Since consumers prefer the cuisine from their native countries, immigrants are driving up demand for ethnic cuisine.

For Instance, the UN Department of Economic and Social Affairs Population Division (UN DESA) reported that in 2020, approximately 20 countries are home to two-thirds of all international migrants. USA continued to be the main destination, receiving 51 million international migrants in 2020, which accounts for 18% of all migrants worldwide. Around 16 million migrants were hosted in Germany, which was in second place behind Saudi Arabia (13 million), the Russian Federation (12 million), and UK (9 million). 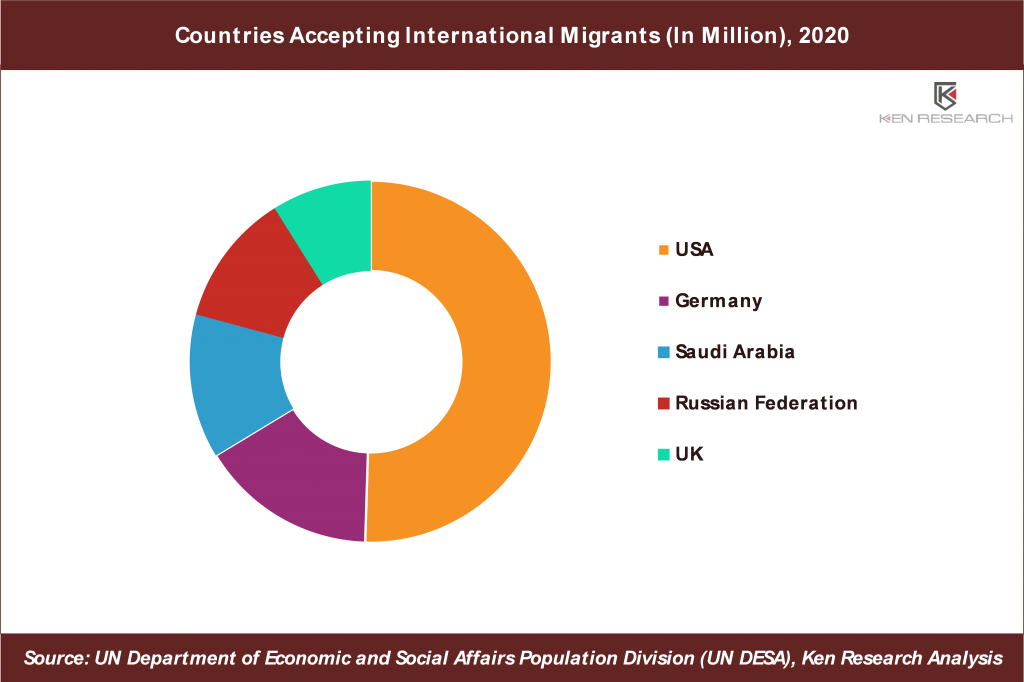 3. Strict Laws and Restrictions That Hinder the Efficient and Smooth Trade of Food Items around the World Restrains Market Expansion. 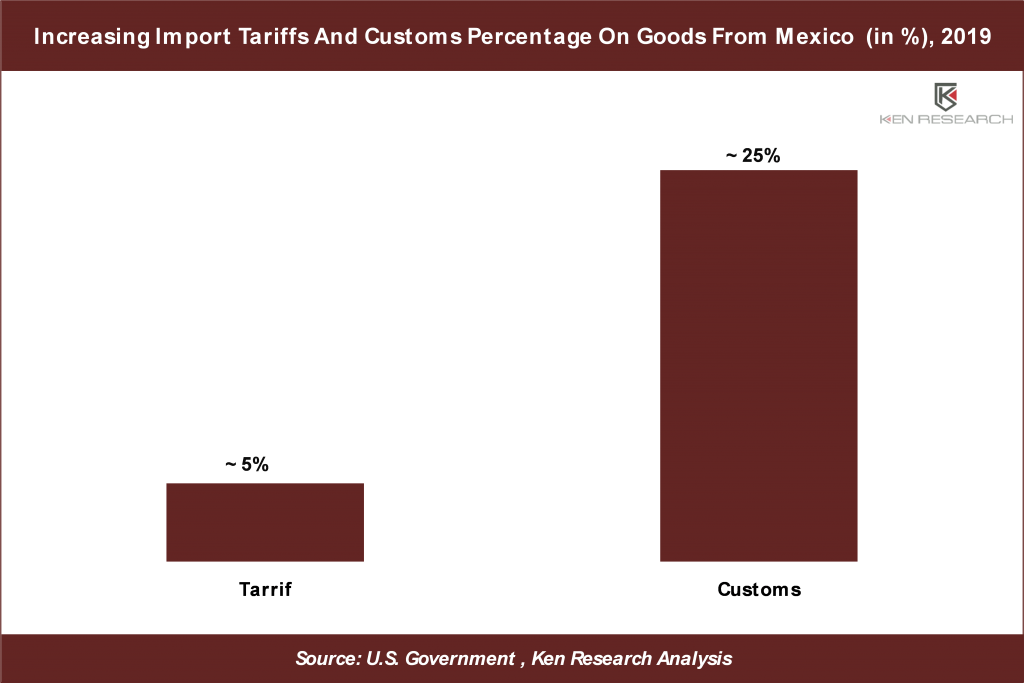