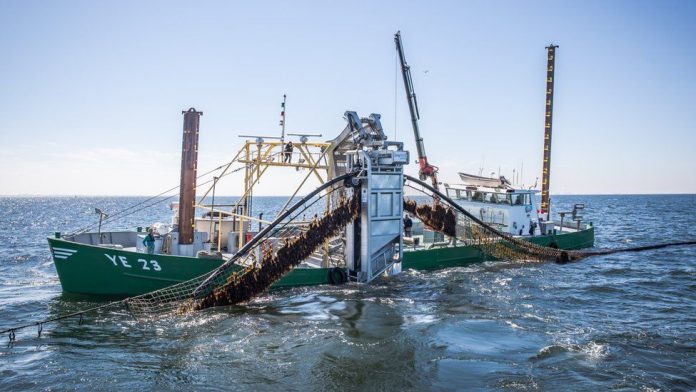 The Global Commercial Seaweed Market was valued at ~US$ 10 billion in 2017. It is estimated to be ~US$ 15 billion in 2022 and is expected to reach a market size of ~US$ 25 billion by 2028 growing with a CAGR of ~9% during 2022 to 2028. The adoption of commercial seaweed in the food and beverage industry is likely to drive market growth. 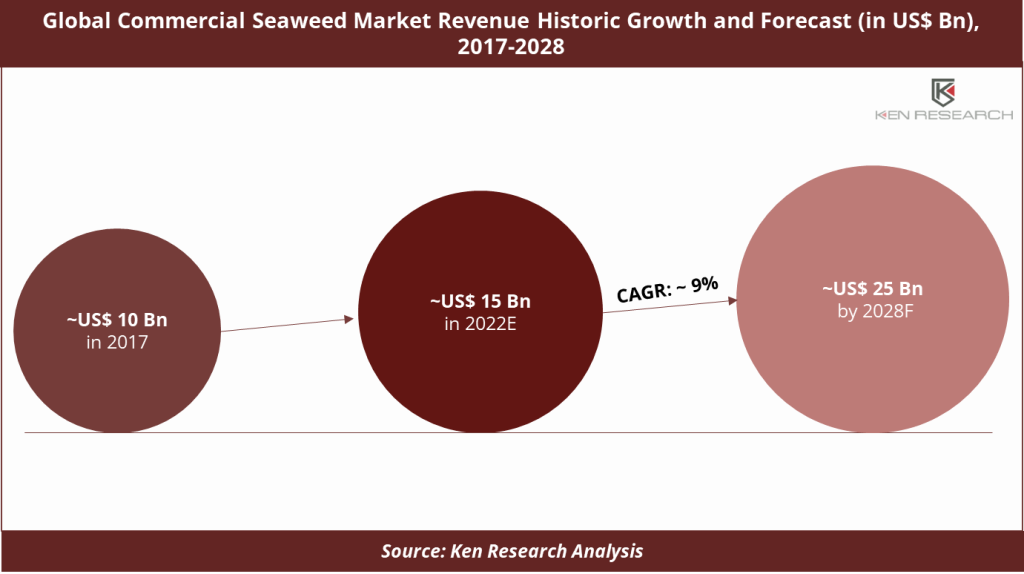 Seaweed is highly rich in vitamins and minerals, which have many health benefits such as support thyroid function, help in reducing body weight, and reduce the risk of heart diseases.

In September 2022, Central Marine Fisheries Research Institute (CMFRI) a research institute in Kerala, India developed a remedy called Cadalmin TM LivCure extract made out of seaweed for fighting against fatty liver diseases that include obesity and type 2 diabetes.

The high cost of seaweed cultivation is hindering the growth of the global commercial seaweed market.

Water contamination has greatly risen recently which creates many difficulties while collecting algae from ocean bottoms, which raises the price of seaweed at the market. However, government involvement in seaweed production i.e. helping help farmers and manufacturers meet the rising demand from the food & beverage industry is likely to overcome this challenge

By Product:  The red seaweed segment by product held the largest market share in 2021 in the global commercial seaweed market. 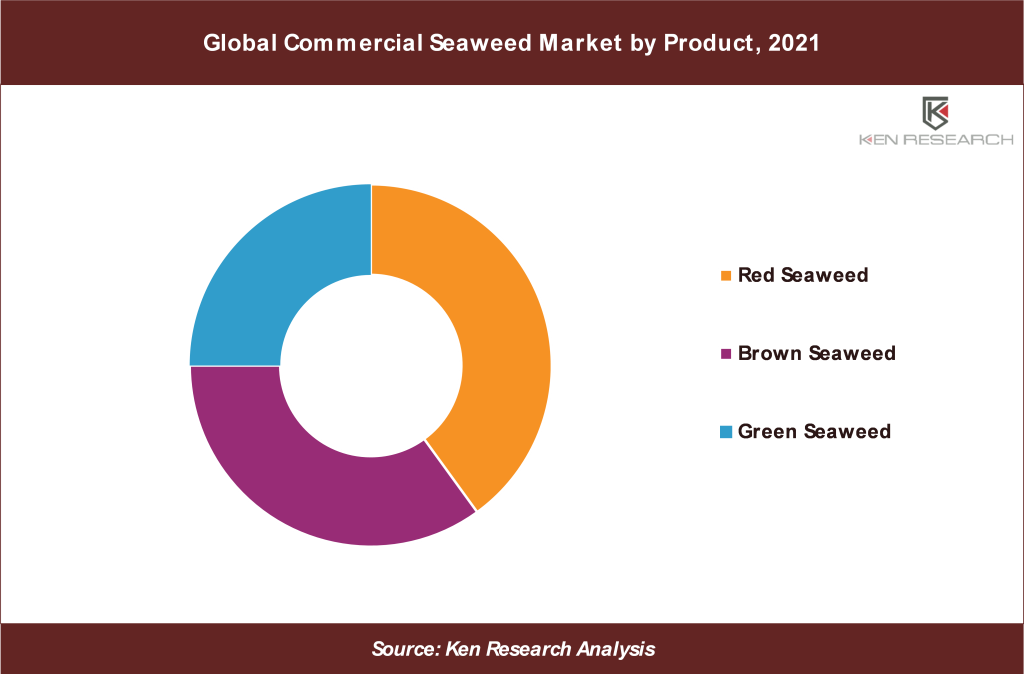 By Form: The powdered segment by form held the largest market share in 2021 in the global commercial seaweed market. 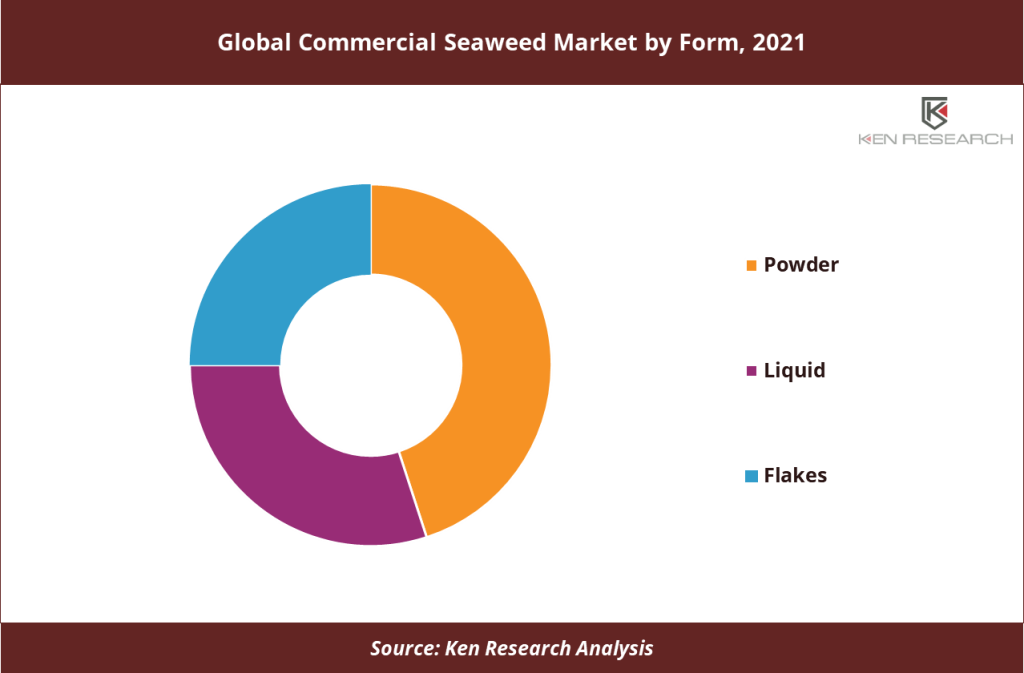 By Application: The food and beverage segment accounted for the largest market share in the application segment in 2021 for the global commercial seaweed market.

By Geography: Asia-Pacificaccounted for the largest market share among all regions within the total Global Commercial Seaweed Market in 2021. 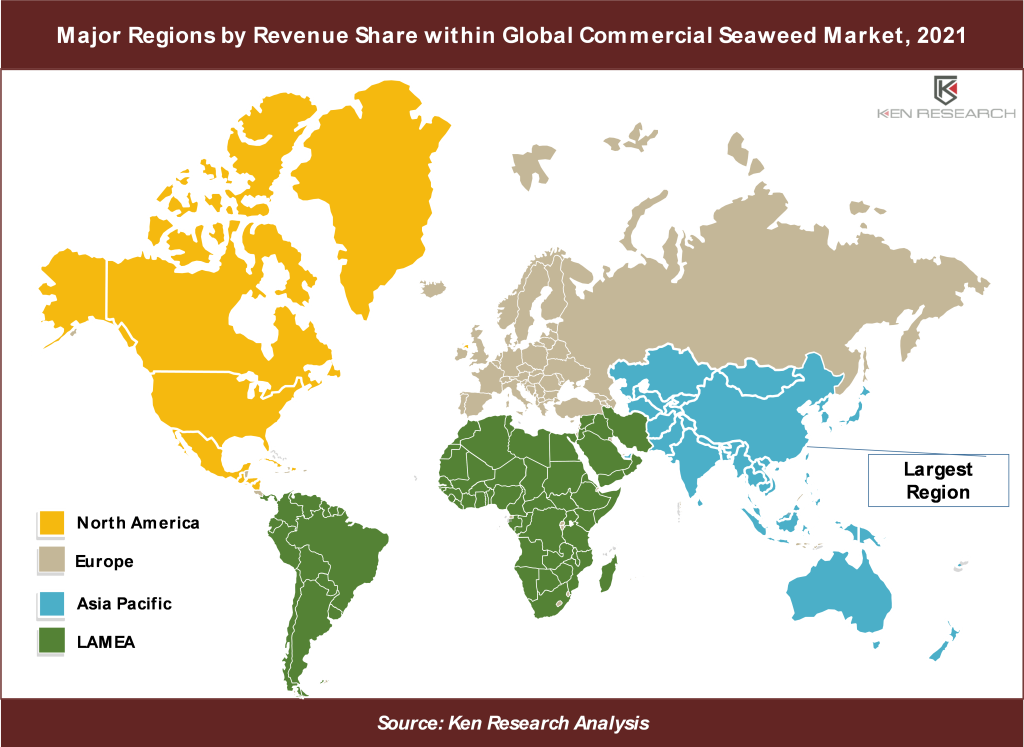 The global commercial seaweed market is highly competitive with ~300 players, which include globally diversified players, regional players as well as a large number of country-niche players each with their niche in commercial seaweed product manufacturers. Large global players constitute ~10% of competitors, while country-niche players represent ~60% of competitors and regional players represent ~30% of Competitors. Some of the major players in the market include Cargill Inc., DuPont, Roullier Group, Biostadt India Limited, Seasol, Leili Group, Gelymar SA, BrandT Consolidated, Inc., FMC Corporation, CP Kelco, and among others.

The Global Commercial Seaweed Market is forecasted to grow significantly with a CAGR of ~9% during the forecast period primarily driven by the adoption of commercial seaweed in food and beverage due to its high nutrient value. Though the market is highly competitive with ~ 300 participants, country-niche players hold a significant share of ~60% followed by regional players at ~30% by number of competitors by type. Asia-Pacific is the dominant region, owing to the increased usage of seaweed in traditional cuisines.

Ken Research has recently published report titled, “Global Commercial Seaweed Market Size, Segments, Outlook, and Revenue Forecast 2022-2028” The Global Commercial Seaweed Market is segmented by Product, Form, and Application. In addition, the report also covers market size and forecasts for the four major regions for the global commercial seaweed market. The revenue used to size and forecast the market for each segment is US$ billion.

Buy Now WHAT IS THE SIZE OF GLOBAL ALGAE PRODUCT INDUSTRY? Global Algae Product market is growing at a CAGR of ~% in 2017-2022 and is...
Read more
Food Beverage and tobacco