Global Vegan Chocolate Confectionery Market is expected to reach a market size of US$ 1200 million by 2028: Ken Research 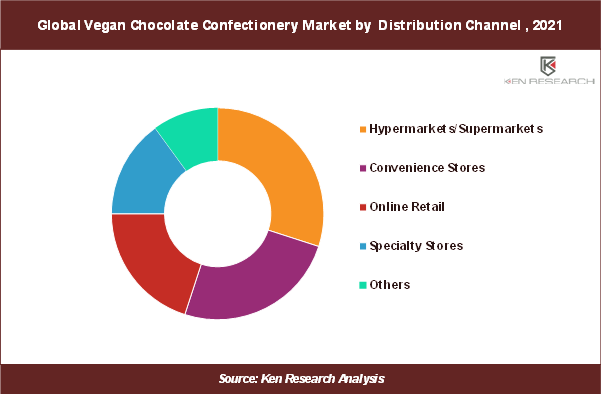 Global Vegan Chocolate Confectionery Market was valued at ~US$ 335 million in 2017. The demand for vegan products has been driven by consumers’ growing acceptance of such lifestyles, particularly among teenagers and employees in the workplace, and the market is expected to expand significantly during the estimated period. It is estimated to be ~US$ 575 million in 2022 and is expected to reach a market size of ~US$ 1,200 million by 2028 growing at a CAGR of ~13% during 2022-2028. 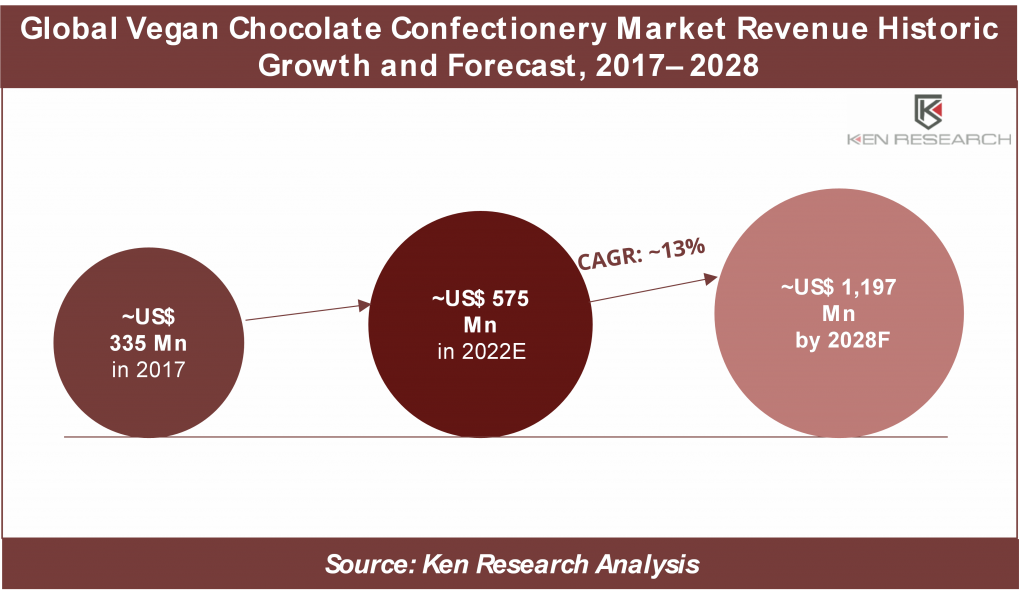 An increase in consumer health awareness is driving up demand for vegan chocolate since a well-planned vegan diet that follows healthier dietary guidelines provides a body with all the nutrients it requires.

By Product- Molded Bars dominated the market in 2021 since chocolate bars have become the most popular type worldwide. 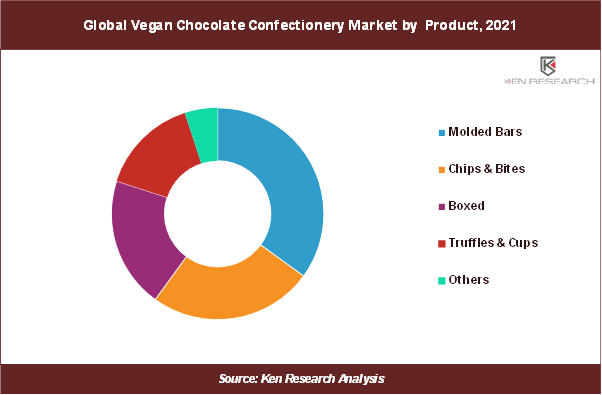 By Type- The milk segment accounted for the highest market share in 2021, due to the increasing demand for such products because of its sweet and creamy flavor. 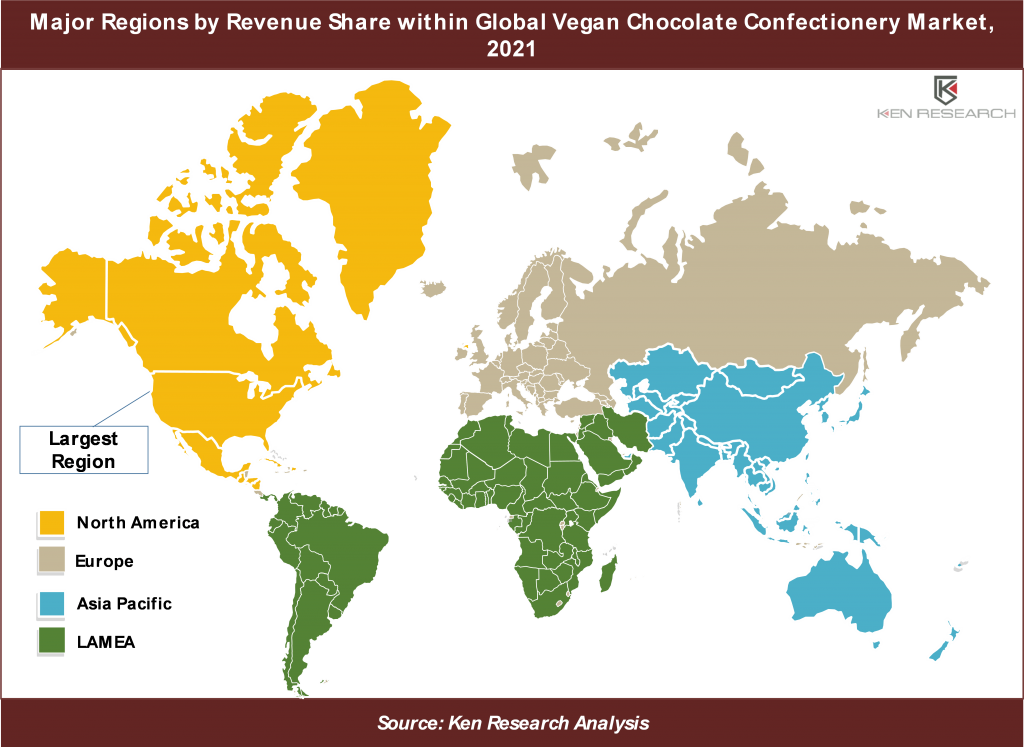 By Geography: North America accounted for the largest market share among all regions in 2021, owing to the region’s growing vegan population is expected to boost the market growth.

The Global Vegan Chocolate Confectionery Industry is competitive with ~100 players which include globally diversified players, regional players as well as several country-niche players each with their niche in Vegan Chocolate Confectionery. Large global players constitute ~15% of competitors, while country players represent the largest number of competitors. Some of the major players in the market include Alter Eco, Endangered Species Chocolate, LLC, Endorfin Foods., Equal Exchange Coop, Goodio, Mondelēz International, Nestle, No Whey Chocolate, The Hershey Company, Theo Chocolate, Inc., and others. 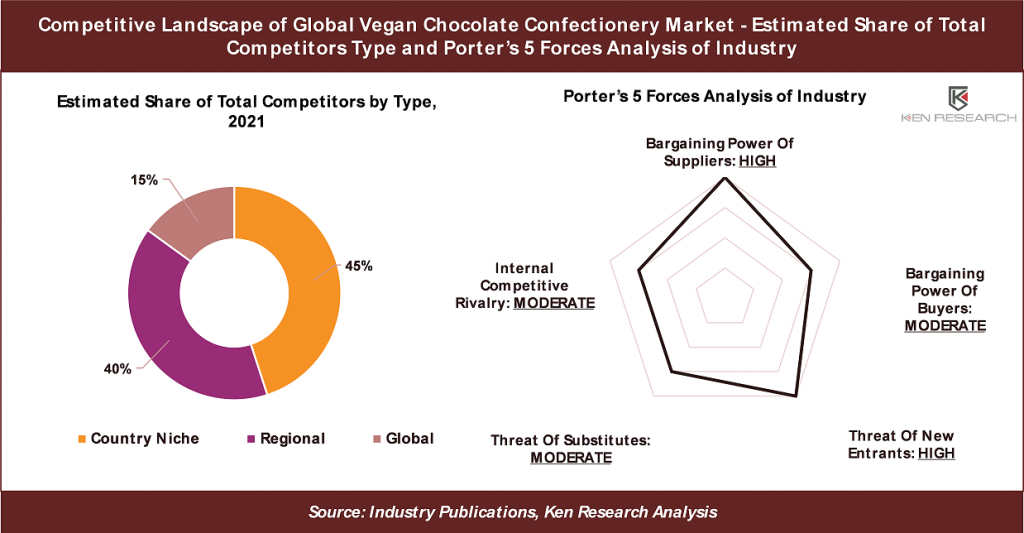 The Global Vegan Chocolate Confectionery Market is anticipated to grow significantly during the projected period (2022-2028) due to an increase in the number of initiatives and public awareness about environmental protection and animal suffering. Furthermore, adolescents and adults are dealing with issues such as food allergies and lactose intolerance, which have influenced individual eating habits in recent years. Though the market is competitive with ~100 participants, few country-niche players control the dominant share and regional players also hold a significant share.

Ken Research has recently published report titled, Global Vegan Chocolate Confectionery Market Size, Segments, Outlook, and Revenue Forecast 2022-2028 segmented into Product, Type, and Distribution Channel. In addition, the report also covers market size and forecasts for the four regions. The revenue used to size and forecast the market for each segment is US$ Million.

The China Catering Market is witnessing a steady recovery from the disruptions induced by the Global pandemic during the year 2020-2021: Ken Research

Buy Now Chain Structure; Chain operation had become the fastest-expanding business model for the catering industry in China. In 2020, the revenue generated from larger...
Read more