Global Dietary Fibers Market expected to Reach a Market size of ~US$ 15 billion by 2028: Ken Research 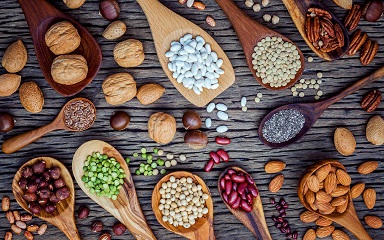 Dietary fiber is a class of plant-based substances that human bodies are unable to fully digest. Whole grains, fruits, and vegetables are all high in fiber, which has repeatedly been demonstrated to improve health and reduce illness risk. Foods made of plants, such as fruits, vegetables, whole grains, beans, and pulses, contain a complex mixture of many various substances that together make up dietary fiber.

According to Ken Research Analysis, the Global Dietary Fibers Market was valued at ~US$ 5 billion in 2017. Increased product demand due to growing consumer awareness of eating a healthy diet and leading an active lifestyle is likely to fuel the market expansion of dietary fibers in the forecasted period. It is estimated to be ~US$ 8 billion in 2022 and is expected to reach a market size of ~US$ 15 billion by 2028 growing at a CAGR of ~11% during 2022-2028. 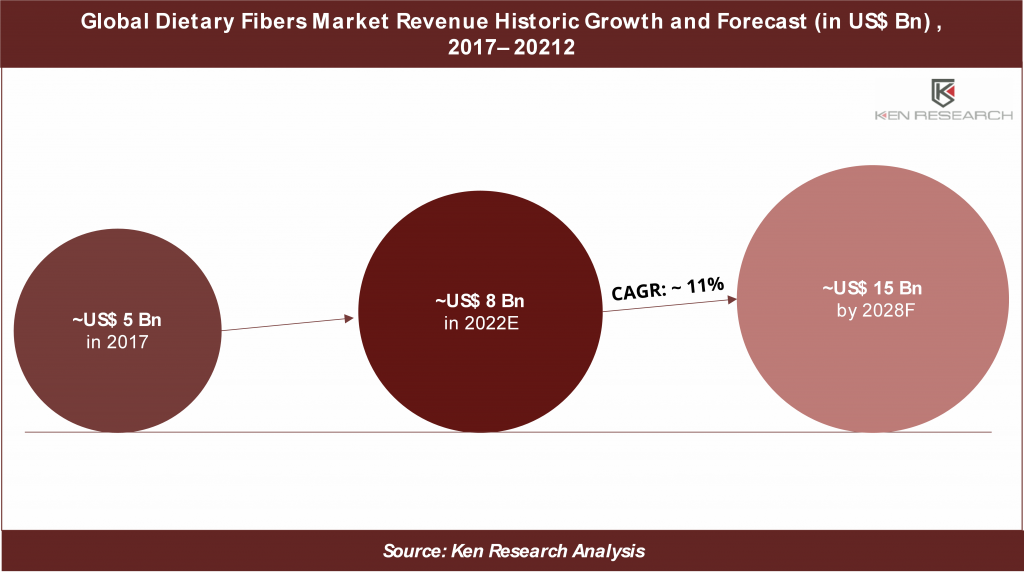 By Source – The Cereals & Grains segment dominated the market in 2021, as consumption of fibers lower the risk of cardiovascular conditions like coronary heart disease and stroke. 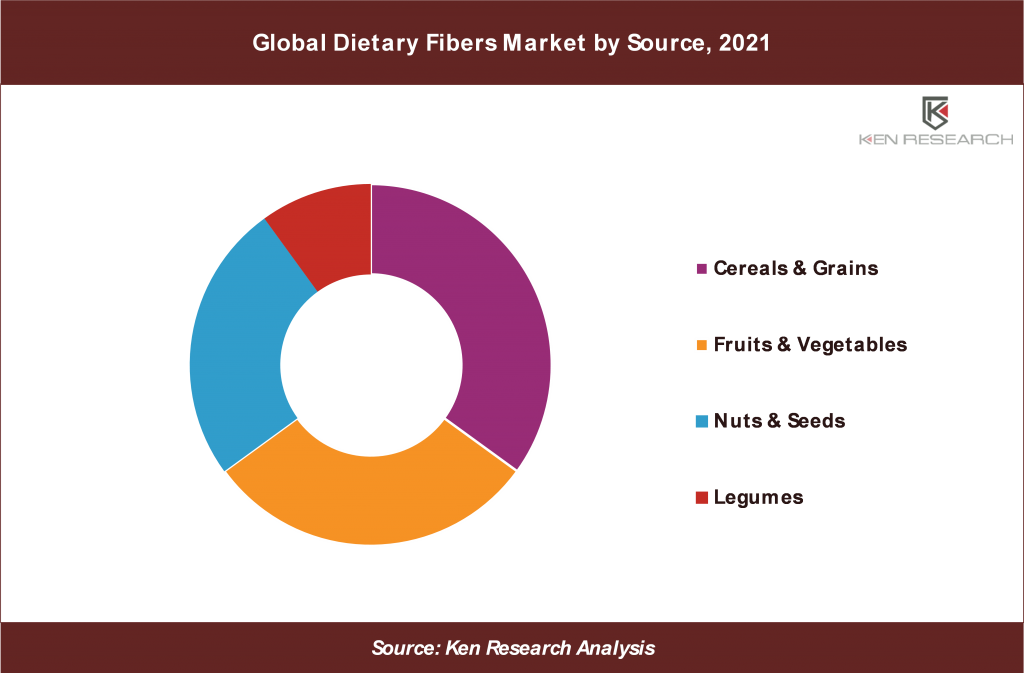 By Type- The soluble segment accounted for the highest market share in 2021, as soluble fiber has the potential to lower blood cholesterol and sugar levels which aids in blood glucose control, lowering the risk of diabetes.

By Application- Food & Beverages accounted for the highest market share in 2021 owing to increased consumer knowledge of the value of dietary fiber in daily meals.

By Geography: Asia Pacific accounted for the largest market share among all regions in 2021, due to the young population in developing countries like India and Bangladesh becoming more aware of the importance of consuming nutrient-dense food products . 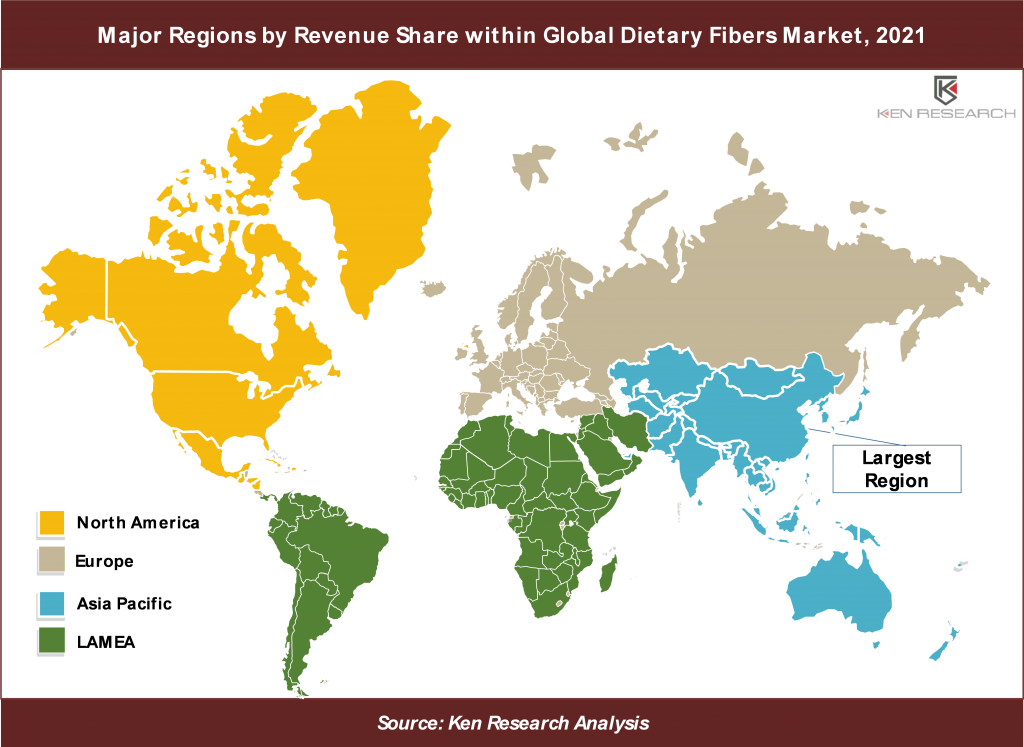 The Global Dietary Fibers Market is highly competitive with ~200 players which include globally diversified players, regional players as well as a large number of country-niche players each with their niche in Dietary Fibers. Large global players constitute ~15% of competitors, while country niche players represent the largest number of competitors. New product launches, geographic expansions, R&D investments, and mergers and acquisitions are major endeavors to boost market share. This aids in their investigation of the untapped market potential. To ensure an effective flow of their products throughout all regions, industry players turn to supply chain agreements with dealers and distributors. Some of the major players in the market include Cargill, Incorporated. Ingredion., Tate & Lyle, Roquette Frères, Archer Daniels Midland Company (ADM), DuPont., J. Rettenmaier & Söhne GmbH + Co KG, Kerry Group plc., Nexira, BENEO, and others. 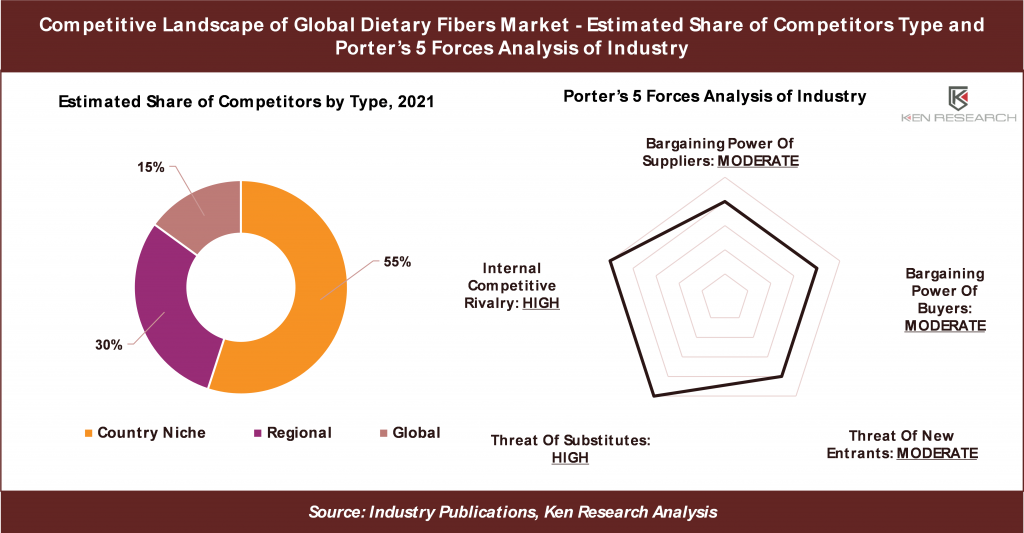 The Global Dietary Fibers Market is anticipated to grow significantly during the projected period (2022-2028) as the rising consumer preference for preventative healthcare and maintaining a healthy lifestyle. Additionally, the market is developing due to the rising prevalence of chronic lifestyle diseases like gastrointestinal disorders, hypertension, diabetes, and cardiovascular diseases (CVDs). Consumers are becoming more aware of the advantages of including fiber in regular diets through meals, beverages, nutritional supplements, and medications. Though the market is competitive with ~200 participants, country-niche players control the dominant share and regional players also hold a significant share.

The Global Dietary Fibers Market Size, Segments, Outlook, and Revenue Forecast 2022-2028 is segmented into Source, Type, and Application. In addition, the report also covers market size and forecasts for the four regions. The revenue used to size and forecast the market for each segment is US$ Billion

Customers are always worth businesses that are open to criticism and deliver a platform to share their experiences, grievances, and concerns. To take your...
Read more
Business

Buy Now Water Quality and environmental safeguarding is moving up the agenda of Saudi Arabian government with a Decree from the various office of...
Read more
Business

Buy Now Residential units would be a major booming segment to focus on due to the rising younger population, ex-pats, and government-sponsored affordable housing...
Read more