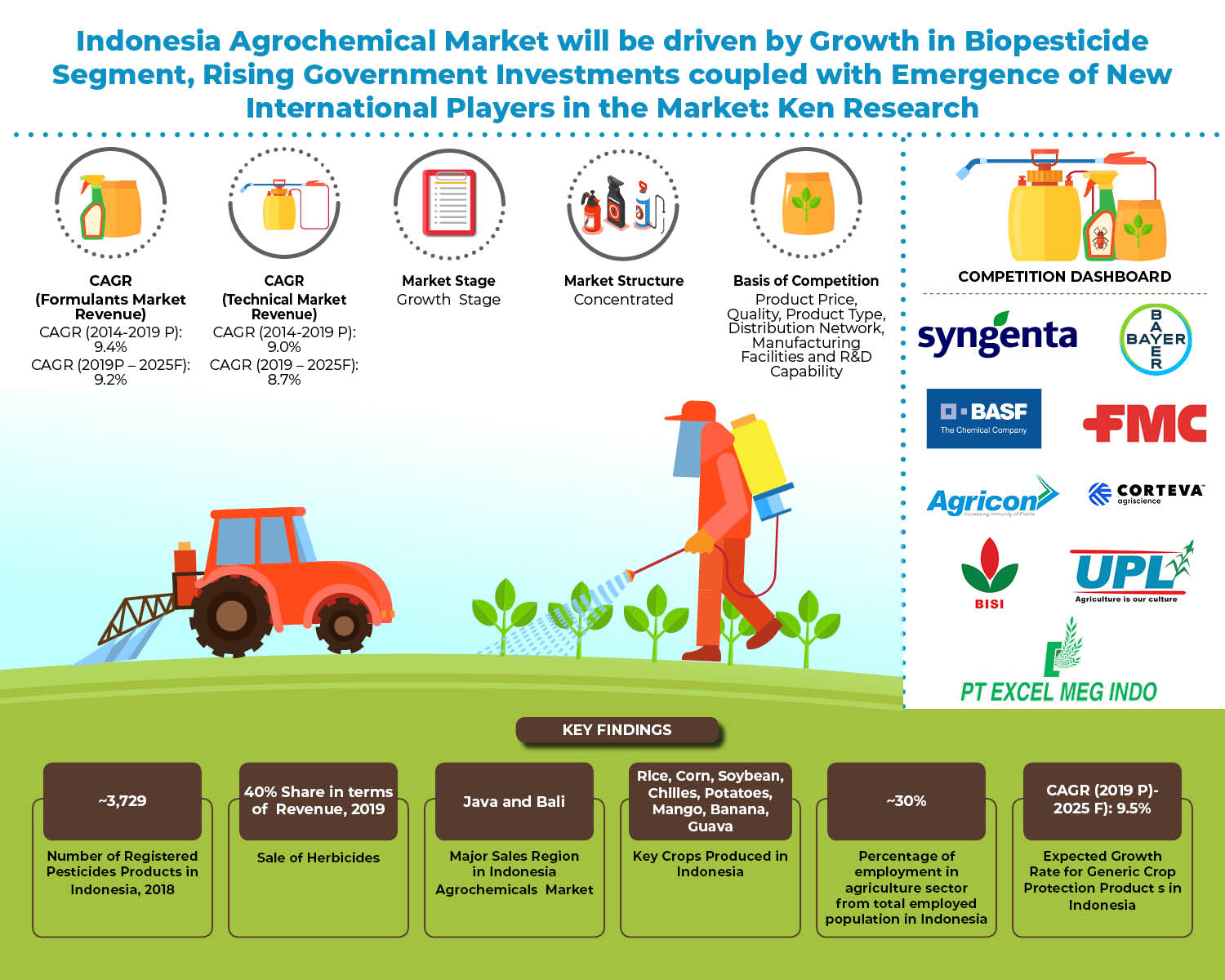 How Is Indonesia Agrochemicals Market Positioned?

The Indonesia Agrochemicals market is currently placed at the growth stage. Majority of the international players have their production plants located within Indonesia. The country mostly relies on imports for the procurement of active ingredients from other countries including the US, China, France, UK, and others. The import of active ingredients is considered to be a much cheaper option than producing products domestically. The market is mostly dominated by international players including Bayer, Syngenta, FMC, Corteva and others. The presence of international players has also helped in ensuring delivery of highest quality products at competitive prices. Rising investment support by The Indonesia government and increasing demand for Biopesticides would lead to higher market growth in the future.

The market size of agrochemicals for Formulants was valued at USD ~ million in 2019 (P). The market recorded its highest growth in sales during 2016 due to the presence of favorable climatic conditions and La Nina Phenomena, thereby contributing to high agricultural production in the country, resulting in higher demand for agrochemicals. However, in the following years, the country suffered from prolonged dry spells which led to a fall in overall sales of agrochemicals in the country. Given that agriculture being a prime activity in the country, the market has been recording relatively low sales. Some of the major reasons for this include lack of awareness among farmers, stringent regulations related to chemical usage and circulation of illegal or counterfeit pesticide products in the country.

How Indonesia Agrochemicals Market Is Segmented?

By Type of Pesticides

Indonesia Agrochemicals market has been segmented on the basis of product type such as herbicides, insecticides, fungicides, biopesticides, and others (such as Plant Growth Regulators, Adjuvant, Rodenticides, and Others). Owing to a variety of usage in multiple crops such as rice, corn, vegetables, palm oil, and others, herbicides occupy highest share in the market and with increasing awareness among both consumers and farmers, there is an expectation of an increase in demand for biopesticides and other production alternatives in the market. Owing to the migration of insect types such as ‘fall armyworm’ in the country, the demand for insecticides is expected to increase in the coming years.

The major types of herbicides used in Indonesia agrochemicals market include Glyphosate, Paraquat, Atrazine and others which are occupying major usage in the production of rice, corn, soybean, oil palm and others.

With prolonged dry seasons in the country, the demand for insecticides has been increasing. This has also led to the need for the development of new insecticides types in the country. Insecticides in Indonesia are mostly used in the cultivation of rice, corn, citrus, banana, tomatoes and other vegetables. Many national and international companies are seen to investing more in R&D for the development of new insecticide and other types of pesticides.

By Type of Product

Pesticides are available in three forms including liquid, granule, and powder with most preferred being liquid form. The liquid form is relatively cheaper when compared to other form and can easily be used in crops where an application is very complex such as in chilies. Quantity required per usage in the case of liquid is much less as compared to granule and powder form.  The second most preferred form is powder generally used in leafy vegetables.

By Type of Crops

Major application crops type include Cereals, Vegetables, Fruits and Plantation. Indonesia is a major producer of cereal crops including rice, corn, soybean, maize, barley, and others thereby require the highest agrochemical application in the country.  Major cereal producing regions in the country include Java, Bali, Sumatra, Nusa Tenggara, and others. Other crops requiring high usage of agrochemicals in Indonesia include Onion, Cassava, Mango, Banana, Cabbage, Chilies, and others.

By Types of Cereal Crops

Cereal crops have contributed the most in the overall crop protection market on the basis of revenues with Rice contributing the most out of all the cereal crops. Major Cereal production regions in the country include Java region, Bali, Sumatra, West Nusa Tenggara, East Nusa Tenggara, Sulawesi, and others. Major pesticides used in cereal crops include Glyphosate, Pyrethroid, Triazole, Rynaxypyr, and others.

By Types of Vegetable Crops

The major type of vegetable crops produced in the country includes onion, chilies, potatoes, cassava, tomatoes, and others. Out of all the vegetable types, the maximum application is required in chilies followed by onion. The frequency of application is very high in the case of chilies whereas farmland for onion production is generally large, thereby requiring higher usage of agrochemicals.

By Types of Fruit Crops

Major fruit crops produced in Indonesia include Citrus, Banana, Mango, and others requiring usage of herbicides and insecticides including Emamectin Benzoate, Chlorpyrifos, Carbamate and others.

By Plantation Crops: Indonesia is a major producer of palm oil. Other plantation crops majorly grown in Indonesia include Cotton, Rubber, Tea, Coffee, and others. Plantation companies generally demand high quality patented products. Some of the pesticides demanded include Paraquat, Atrazine, Glyphosphate, and other herbicides and insecticides.

How Is The Competitive Landscape Of Agrochemical Market In Indonesia?

Indonesia agrochemicals market is concentrated with most of the market share occupied by international players in the country. The market is dominated by international players including Syngenta, Bayer, FMC, Corteva, Nufarm, and others. It is observed that international players have adopted the strategy of merging and acquiring other companies in order to further increase their market shares in the country. Given the economic situation of farmers in Indonesia, product price is a major competing factor for these companies. Other competing factors include quality, distribution network, diverse product portfolio, manufacturing facilities/capacity, and others. International companies have now started focusing on more R&D activities so as to develop new active ingredients that can be used in multiple crop types.

What Is The Future Outlook And Projections For Indonesia Agrochemicals Market?

The future prospects of the agrochemicals a market in Indonesia is expected to grow at a CAGR of ~% over the period 2019(P)-2025F. The revenue generated by the end of 2025 is expected to be over USD ~ million from the sale of formulated agrochemicals in Indonesia. By 2030, Indonesia is expected to become the fourth largest country in terms of population, thereby increasing the demand for food/agricultural products. Therefore, farmers have to resort to measures such as the use of agrochemicals in order to increase their productivity so as to cater to rising food demand. It is also expected that with new initiatives and schemes coming up in the country, monetary support from government to farmers will increase, thereby making it economically viable for them to use alternative methods of production which they could not afford earlier.

By Types of Pesticides

Others (including Metsulfuron, Acetochlor etc)

Others (including Azadirachti, Bacillus thuringiensis)

Others (including Carbendazim, Organomerkuri, Sodium Dichromate)

By Type of Crop Protection Product

By Types of Crops

By Type of Cereal Crops

Others (including maize, barley and other cereal crops)

By Type of Vegetables

By Type of Fruits

Others (Including Guava, Mangosteen and other fruits)

By Type of Plantation:-