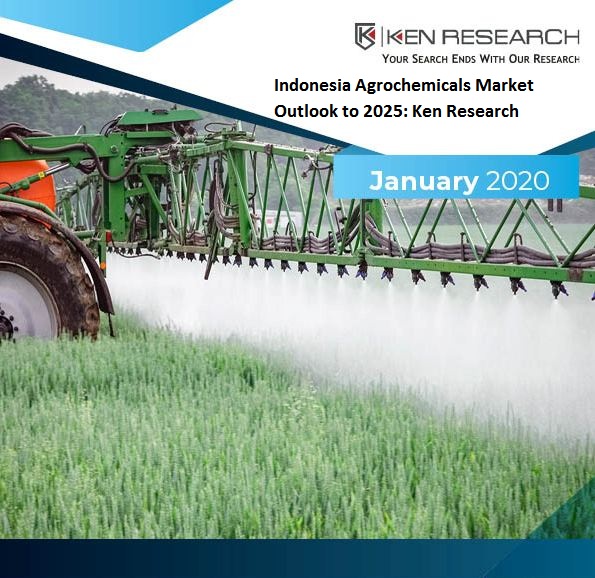 Indonesia Agrochemicals Market:- The report titled “Indonesia Agrochemicals Market Outlook to 2025- By Type of Pesticides (Herbicides, Insecticides, Fungicides, Bio Pesticides and Others), By Type of Crop Protection Product (Generic and Patented), By Application (Cereals, Vegetables, Fruits and Plantations) and By Sales Regions (Java & Bali Region, Sulawesi, Sumatra and Kalimantan)” provides a comprehensive analysis of the agrochemicals the ET in Indonesia. The report also covers agricultural overview scenario in Indonesia, market genesis, market size in terms of revenue from formulates and technical’s, various trends, and developments driving the market and the issues and challenges generally faced by entities in the market. The report also provides an analysis of the overall value chain involved in the manufacturing process, Industry’s SWOT analysis and competitive scenario with company profiles of major companies. In the end, the report concludes with future projections and analyst recommendations with the t on major opportunities and cautions related to the market.

By Types of Pesticides: Owing to its wide application in a variety of crops, herbicides occupy the highest share in terms of overall sales of agrochemicals in the country. In major crops such as rice, corn, soybean, herbicides are usually applied in combination with insecticides, thereby driving insecticides demand as well in the country. Bio-pesticides have been present in the market for last 5-7 years, however due to lack of awareness and education among farmers, there is still a w demand for these products. However with various government initiatives and training programs by international companies to increase awareness among farmers, it is expected that sales of Biopesticides would increase in the coming years.

By Types of Herbicides: The major herbicide types in Indonesia are Glyphosate, Paraquat, Atrazine, Acetochlor with Glyphosate occupying the highest demand in the country.

By Types of Insecticides: The major insecticide types present in Indonesia is Pyrethroids, Abamectin, Rynaxypyr, Chlorpyrifos, Azadirachti. It was witnessed that players were focusing on introducing a w type of insecticide products owing to the in demand and supply for a w particular insecticides in the market.

By Types of Fungicides: The major fungicide types in Indonesia are Triazole, Strobilurin, Chlorothalonil, sodium dichromate.

By Type of Product: In Indonesia, a jor proportion of the market is occupied by generic products. Generic products are relatively low priced and easily available when compared to patented products in the market. These are some of the major reasons for its high demand among consumers, on the other hands, the high-quality nature of patented products are generally demanded by large scale farmers and plantation companies.

By Form of Agrochemicals: Agrochemicals are generally available in three forms including Liquid, Granule, nd Powder. Liquid agrochemicals have a applications and therefore are most preferred in crops such as chilies where the action is complex in nature. Granules and Powder are applied either directly onto crops or are generally mixed with other formulations such as oil and water. However, when compared with a quid formulation, granule and powder are used in higher quantities.

By Types of Crops: In Indonesia, cereals are observed to occupy the highest usage of agrochemicals with rice occupying the est share. Major cereal crops grown in Indonesia include soybean, corn, maize, barley, oats, rice,and others thereby driving demand for pesticides including Glyphosate, Strobilurin, Pyretheroid, Abamectin and contact fungicides. The second-highest demand for pesticides is observed by vegetables followed by plantation and fruits. Major fruits and vegetables cultivated in Indonesia include Onion, Cassava, Mango, banana, Potatoes, Tomatoes, and others.

Indonesia agrochemical market is observed to be concentrated in nature with majority of market share in terms of revenue occupied by international players having manufacturing facilities located in Indonesia. Major production clusters in the country are East Java, West Java, Central Java, Sumatra (Medan) and Sulawesi. New regulations including RSPO and PSAT for fresh food of plant origin have impacted the sales of agrochemicals in the country and with these regulations becoming stricter in future; the players are focussing to be more innovative and increasing their expenditure in R&D activities in the coming years.

The future prospects of the agrochemicals market in Indonesia is expected to grow at a CAGR of 9.2% over the period 2019(P)-2025F. The growth in demand is expected to be supported by factors including government support to promote agricultural activities, increasing population thereby increasing demand for agricultural products, emergence of new national and international players in the market.

By Types of Pesticides

Others (including Metsulfuron, Acetochlor etc)

Others (including Azadirachti, Bacillus thuringiensis)

Others (including Carbendazim, Organomerkuri, Sodium Dichromate)

By Type of Crop Protection Product

By Types of Crops

By Type of Cereal Crops

Others (including maize, barley and other cereal crops)

By Type of Vegetables

By Type of Fruits

Others (Including Guava, Mangosteen and other fruits)

By Type of Plantation:-

Trade Scenario in Indonesia Agrochemicals Market (By Value, By Volume and By Countries)