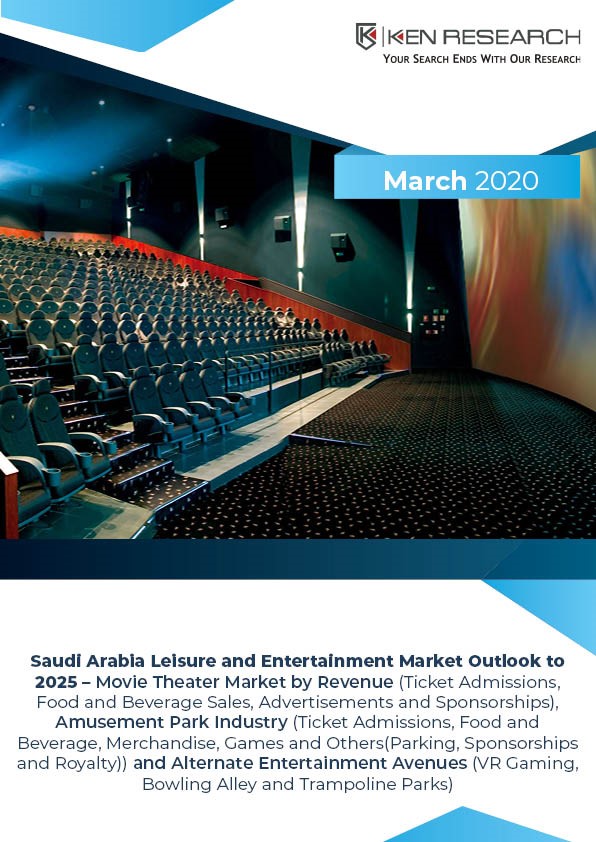 The Saudi Kingdom after a 35-year hiatus, brought back film exhibition in the country in line with its vision to make Saudi Arabia an entertainment hub in the middle east.  SEVEN, a subsidiary of the country’s sovereign wealth fund PIF entered into a joint venture with AMC Theaters, world’s largest theater chain to open the kingdom’s first theater in King Abdullah Financial District in April 2018. Since then, more than ten theaters have become operational as of December 2019. Under the auspices of General Entertainment Authority, ~ global cinema operators have been granted licenses to operate movie theaters.

GCC’s VOX Cinema currently operates ~ movie theater locations, while the homegrown MUVI Cinemas operates ~ movie locations. Both these operators specialize in premium movie experience with fine dining and IMAX experience.  SEVEN has been mandated with a budget of SAR ~ Billion to develop more than ~ Cinemas across the Kingdom, totaling more than ~ screens overall. With the population expected to reach Million by 2024, the entertainment sector is expected to boom in the growth phase period.

AMC and VOX have signed deals with SEVEN to launch more than ~ cinemas till 2030. Each has more than USD ~ Million allocated for the construction and operation of these theaters. The sector is expected to provide ~ jobs in this period.

The Saudi government entities have actively participated in funding and promoting a movie theater establishment. With a single theater in operation in 2018, more than ~ theaters came into operation by the end of 2019. The industry was worth SAR ~ million in the year 2019.

Non-Saudis constitute nearly 40% of the population from Asian, American and European origin along with 23 Million tourists as of 2018. This has made the screening of Hollywood and Bollywood content feasible.

Private cinema viewing, fine dining, 4D cinema and luxurious seats are few experiences offered in KSA which can provide large revenues from fewer footfalls. People in Saudi Arabia have been observed to have a strong affinity to commercial cinema with special screen formats that have forced movie companies to innovate cinematic offerings.

By Revenue Source (Ticket Sales, Food and Beverage, and Advertisements and Sponsorships):

Ticket sales constitute a majority share of total movie theater revenues. As the cinema industry is still nascent, this segment will continue to dominate. As more and more theaters open, and more people visit them, concessions on tickets will be more common. Nearly ~% of the movie theaters operating in Saudi Arabia had ticket admission revenues more than ~%, compared to mature companies such as PVR and AMC, which have between ~% average revenue share of ticket admissions.

F&B revenues are still growing and are not at par with countries with full matured theater industry, where their share of the revenue dominates movie theater revenue. On average, Saudi spends between ~ SAR on F&B.

The competition is currently concentrated between VOX, AMC, and MUVI who operate 7, 2 and 2 theaters respectively as of January 2020. GEA has granted licenses to ~ movie theater chains. The overall movie theater revenues as of December 2019 were observed to SAR ~ Million, with VOX Cinemas Jeddah and VOX Cinemas Riyadh the top two movie theaters in terms of annual revenue.

spending on entertainment in Saudi Arabia

Buy Now 1. The increased investment in the region, rapid population growth, and Increasing Smartphone Penetration are some of the major growth drivers in the...
Read more
Advertising

Global Digital Signage market expected to record a CAGR of ~7% during the forecast period (2017-2028): Ken Research