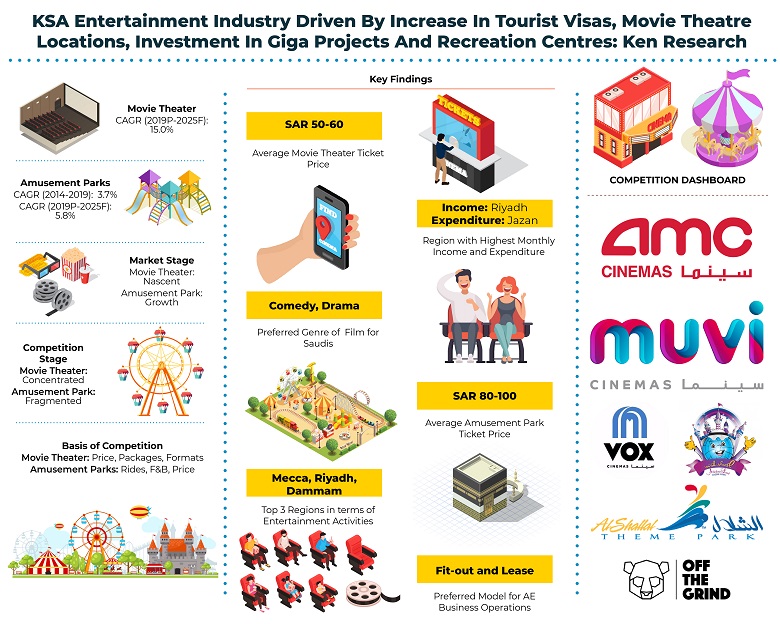 The Saudi Amusement Park industry can be dated to 1986, when Atallah Theme Park was opened in 1986 across 45,000 square meters, followed by a renewal in 2008 and renovation and grand opening in 2010. Al Shallal theme park began construction in 1999 and became operational in 2004. The park is the topmost grossing theme park in terms of revenue and was built at a cost of USD 100 Million.

The Al Hokair Group became a leading group in terms of entertainment and recreational venues with its Sparky’s brand, through which it increased its market penetration and introduced large scale entertainment for children. The company’s portfolio consisted of 100 entertainment centers across 24 cities.

The liberalization of Saudi Arabia led to the Saudi Vision 2030, where megaprojects across KSA have been planned with completion before 2030 to increase entertainment revenue. Saudi Arabia has allowed women to enter amusement parks and entertainment venues, leading to the establishment of Al Hokair Time, Saudi’s the first women-only theme park, as well as Women’s only night in various other theme parks, thereby increasing visitors.

The Public Investment Fund of the Kingdom has announced to invest in setting up three theme parks under Six Flags brand in Saudi Arabia which is expected to operate by 2021, thereby helping the market to increase the revenues in the long term. Increasing urbanization coupled with expenditure on entertainment activities will drive growth in the future.

As part of the Vision 2030, the KSA the government aims to build top entertainment hubs including 15 new amusement parks across 13 cities, with the government aiming to increasing spend on recreation from 2.3% to 6%. According to the Saudi Investment Authority, preference towards amusement parks ranks higher than cinemas, water parks and other recreational and entertainment activities, as the park is family-oriented, and includes larger audiences.

By Revenue Stream (Ticket Sales/Admissions, F&B, Merchandize, Games and Others)

Admissions had the majority share of revenue streams. In 2019, Admissions to amusement parks contributed ~% to the revenues generated by the market players. Private parties and groups are charges SAR ~ over the ticket price to accommodate dining faculties. Parks organizes group parties with at least 20 people group.

F&B: Major theme parks in Saudi Arabia have well-known restaurants and eateries present within their premises. People spend an average of three hours in a park which raises the demand for such food outlets. The increased demand for restaurants due to growing footfall in theme parks has made this segment contribute ~% in terms of revenue during 2019.

Merchandising showcased dominant share owing to a large number of corporate or school tours visits to theme parks being one of the major entertainment sources in Saudi Arabia.

Arcade games among the revenue contributors to theme parks in the country. Theme parks also offer monthly and an annual subscription to their services, wherein onetime payment is made for a particular period; thereby adding to the overall revenues.

Other ancillary services including parking services offered by theme park operators also contribute to the revenues. Parking and Royalty from third party vendors is also a part of this segment as these vendors either share their sales profits or provide fixed monthly rent.

Various partners such as hospitality, television, print and social media sponsors and various local partners have come together with an entertainment destination to attract customers and creating a revenue source for amusement parks in the process.

The movie theater industry in Saudi Arabia is expected to grow at ~% CAGR from 2019 to 2025F. With licenses granted to more than ~ international movie theater operators as of 2020, and more operators slated to enter the market, the market stage can be expected to enter late growth during the forecast period. As more players enter the market, the competition is also estimated to become less concentrated. High spending the appetite of Saudi and Non-Saudi nationals will also allow theater operators to offer luxury movie viewing and value-added services, thereby increasing the share of F&B revenues.

The competition scenario is fragmented in Saudi Arabia Amusement park market with top 5 amusement parks accounting for nearly ~% of the market in terms of annual revenue as of December 2019. In terms of holding groups, Dubai based Majid Al Futtaim, Fakieh Group, Al Hokair the group is the top three holding groups in the entertainment industry.

The Amusement Park market in Saudi Arabia is expected to grow at ~% CAGR from 2019 to 2025. The growth will be driven by an increase in tourists into Saudi Arabia, the opening of at least ~ amusement and theme parks by 2020, construction and completion of various phases of Giga projects and an overall increase in leisure and entertainment industry in the Middle East, which is expected to receive at least USD ~ Million investments in 2020. The demand for various sizes of amusement parks will drive their establishment in various small, medium and large cities, allowing the various private companies to partner with Saudi Authorities.

Tourism and entertainment in Saudi Arabia

Buy Now 1. The increased investment in the region, rapid population growth, and Increasing Smartphone Penetration are some of the major growth drivers in the...
Read more
Advertising

Global Digital Signage market expected to record a CAGR of ~7% during the forecast period (2017-2028): Ken Research